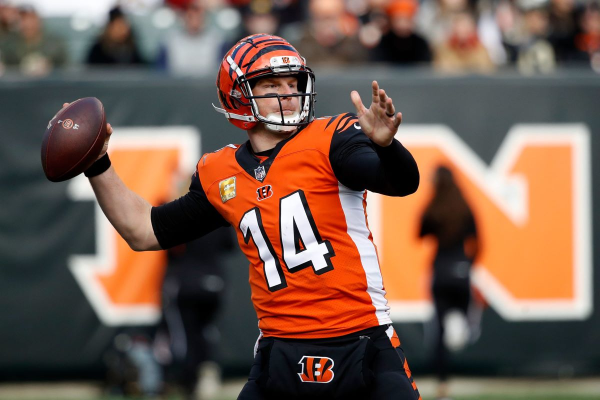 When the Cincinnati Bengals drafted LSU quarterback Joe Burrow with the first pick in the 2020 NFL Draft, it was only a matter of time before they released Andy Dalton. Yet one team’s trash can be another team’s second-string treasure.

Cincinnati parted ways with Dalton Thursday, and the quarterback had a new home just two days later after the Dallas Cowboys signed the veteran quarterback to a one-year contract.

The deal could be worth up to $7 million, but has a base value of $3 million. Dalton was set to earn $17.7 million in the final year of his six-year, $96 million deal with the Bengals this season.

Dalton’s deal raised eyebrows around the league for a couple of reasons. First, Dallas signed a quarterback to a new contract before taking care of starting QB Dak Prescott. Second, many expected a team like New England to bring Dalton in to compete for the starting job.

As a Cowboy, Dalton will be close to home. He lives in Texas and played his college football at TCU in Fort Worth. Not having to move himself or his family amid the coronavirus pandemic could have played a role in the 32-year-old’s decision to sign with Dallas.

In addition to being selected to the Pro Bowl three times, Dalton led the Bengals to the postseason in each of his first five seasons. He earned a record of 70-61-2 in Cincinnati but never won a playoff game.

Still No Deal For Prescott

When news of a deal between Dallas and a quarterback broke, many assumed the team had finally come to an agreement with Prescott. Instead, Dallas secured a backup quarterback by locking up Dalton.

The Cowboys placed the exclusive franchise tag on Prescott in March after the two sides failed to find common ground on a long-term deal that many expect to make the quarterback the highest-paid player in the NFL. The franchise tag will earn Prescott $31.4 million this season.

Prescott proved himself as a high-end quarterback last season while leading Dallas to a record of 8-8. In 16 games, Prescott threw for 4,902 yards, 30 touchdowns, and 11 picks while completing 65% of his passes.

The Cowboys quarterback ranked second in the NFL in passing yards (behind only Jameis Winston) and fourth in passing touchdowns.

Although Prescott hasn’t missed a game in his career, the Cowboys were eager to have a viable second option on the roster. Dalton’s experience as a starter makes him that. The Dalton signing follows in Dallas’ history of bringing in notable backups, such as Jon Kitna, Kyle Orton, Brandon Weeden, and Mark Sanchez.

Did Dalton Choose a Contender?

Upon Dalton’s release from Cincinnati, sportsbooks were eager to place odds on which roster the quarterback would be on during Week 1 of the 2020 season.

The Dalton sweepstakes quickly became a three-team race between the Patriots (-135), Jaguars (+150), and Steelers (+650). The only other teams with available odds were the Raiders and Redskins, each of which was set at +3000.

By agreeing to a deal with Dallas, Dalton went off the board. Did the former Bengal sign with a legitimate Super Bowl contender?

When it comes to winning a Super Bowl, the Cowboys sit behind the same cast of NFC contenders in addition to the two favorites: Kansas City (+650) and Baltimore (+700).

With +1700 odds of winning it all, Dallas owns the sixth-best odds in the NFL.