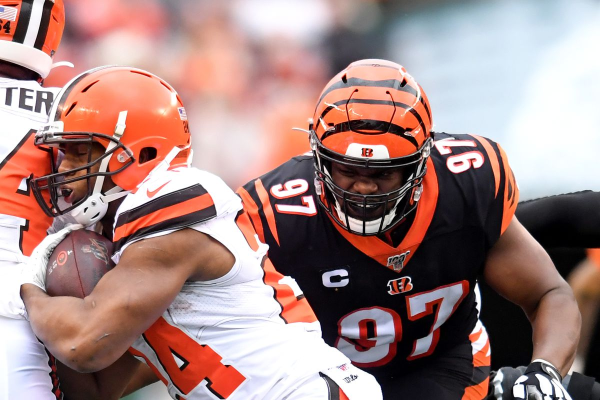 I know we had the NFL season opener last Thurday night with the Kansas City Chiefs beating the Houston Texans, but I really consider this one the first true Thursday nighter of the season, with both teams coming off a game and both with that limited prep time that makes Thursday Night so challenging. Maybe all of the COVID-19 rules help with this, as teams have been taking it a bit lighter in the build-up to the regular season.

Both of these teams lost their opening games, but the narratives were very different. Cincinnati is starting over with a new rookie quarterback, and they almost won the debut of top draft pick Joe Burrow. It definitely looks like things could be heading in the right direction for the Bengals.

Meanwhile, Cleveland got smoked at Baltimore, though by a much better team than the Bengals’ Week 1 opponent, the L.A. Chargers. But the Browns are supposed to be bridging that gap, not falling further behind. For Cleveland, this is a must win, while for the Bengals it would just be a nice result in a season focused on development.

T Jack Conklin – Questionable- Big offseason pickup for the offensive line who might not play.

DT Geno Atkins – Questionable – When healthy he is their best defensive player.

DE Sam Hubbard – Questionable – The defensive line might be really limited this week if all three are out.

It says a lot about what these teams are supposed to be when you see the Browns favoured by 6 after that week one loss. Cleveland has to figure out what they are and some of that leads to figuring out what Baker Mayfield truly is. He might just be an erratic game manager, rather than the next Brett Favre. Nevertheless, from a talent perspective, it is easy to make the Browns a solid favourite at home, and to some extent you can write off a poor performance in week one as a result of the lack of preparation COVID-19 gave to a new head coach. Cincy was competitive last week, but not to the extent that they look likely to exceed expectations this season. They are going to be a team to fade most weeks until we know for sure what Burrow can be.

Though the Browns giving up the points are the best bet here, their money line is just too steep to recommend. I wouldn’t even look at it in a money line parlay as the history of the Browns is just too much to grapple with. On the other side, Cincinnati showed enough last week to let us know the season is not going to be a total write off. I know it may seem counter-intuitive given what I wrote above, but if you want to fade the Browns thinking they were such a mess a week ago, and one that it is going to take more than one week to correct, I can see some merit in the value on the Bengals. This should be a very small play though.

Take the Bengals +210 (but most likely pass)

My first take on this total is to really bet the under hard. These teams only scored a combined 19 points in the opening week. Cleveland faced Baltimore, one of the better defensive teams in the league, and Cincy took on the Chargers, who are solid on that side of the ball. My other inclination towards the under is that for both of these offenses, even with splashy receivers like A.J. Green and Odell Beckham on the field, their respective running games look like the strengths, especially Cleveland with the combination of Nick Chubb and Kareem Hunt. As long as this game does not get lopsided early on, both will be looking to be fairly balanced to take advantage of those strengths. That should mean longer time consuming drives. Even if Cleveland runs away with it I see a score more like 30-7 than 48-24. The under looks good for me, with a predicted score of 27-13.