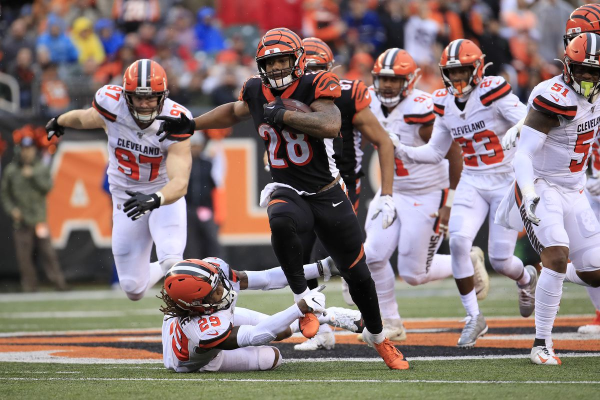 Thursday Night Football will feature a showdown of intrastate rivals as the Cincinnati Bengals (0-1) travel to First Energy Stadium to take on the Cleveland Browns (0-1). Both of these teams will be looking for their first wins after dropping their openers. Kickoff is scheduled for 8:20 pm ET.

In Week 1, the Bengals lost a tough one to the Los Angeles Chargers 16-13. In the loss, Joe Burrow rushed for a touchdown, but only threw for 193 yards and an interception. Joe Mixon rushed for 69 yards on 19 carries. After leading after three quarters, they blew it by giving up 10 unanswered in the fourth quarter.

For the Browns, they were absolutely destroyed by the Baltimore Ravens. To their credit, the Ravens are one of the best in the league, but to lose 38-6 in the opener was embarrassing. In the loss, Baker Mayfield threw for 189 yards, a touchdown, and an interception.

According to Fanduel, the Cleveland Browns come into this one as the clear favorites. Their moneyline sits at -290 while the Bengals are at +235. The spread is currently at +6.5 for the Bengals, and the over/under for total points is 43.5.

The Browns have the unenviable position of currently ranking dead last in scoring in the NFL and ranking 30th in points allowed. When you lose 38-6, though, it is to be expected. Still, it is hard to judge on one week, and those rankings will certainly improve as their team is built more solidly than that.

With their 16-13 loss, the Bengals currently sit 30th overall in scoring while sitting sixth in points allowed. It is far too early to buy a lot of stock into these rankings, though, since it was just Week 1.

Even though there is plenty of excitement around next quarterback Joe Burrow, there is still a realistic understanding that the Bengals will probably not compete this season. Even with that in mind, the Bengals and their fans would take a lot of joy in winning the battle of Ohio and taking down the Browns.

After a senior year at LSU where he threw for 5,671 yards, 60 touchdowns, and just six interceptions, there is a lot of confidence that Joe Burrow’s skills will translate to the NFL. While his overall numbers were average in Week 1, there were glimpses of optimism, including rushing eight times for 46 yards and a touchdown.

With Mixon in the backfield and a healthy A.J. Green and Tyler Boyd, the Bengals certainly have the personnel to put up points. Mixon has to be the focal point, though. Last season, he rushed 278 times for 1,137 yards and five touchdowns.

He also had 35 receptions for 287 yards and another three scores. If the Bengals can get him going early in this one, they may have a chance against the Browns.

Browns Expect To Be Significantly Better Than Opener

To win against the Bengals, they will need more consistent play from Baker Mayfield. He went 21 for 39 in the opener and mustered just a single touchdown and an interception. That won’t do for a contending team. Last year, he threw for 3,827 yards, 22 touchdowns, and 21 interceptions. The Browns need better out of the young star.

Another star they need to step up is Odell Beckham, Jr. In the opener, he had just three catches for 22 yards. While Jarvis Landry is solid, Beckham has to be the clear number one, and he didn’t play like it on Sunday.

Last season, Beckham caught 74 catches for 1,035 yards and four touchdowns from Mayfield. The Browns will be hoping for a bounce-back this week.

Taking The Bengals And The Points

This one is tough. We know the Browns are a better team than they showed against the Ravens, but how much better are they? And how much better can they get on a short week?

There are certainly many unknowns on both sides, and for that reason, I could see this being a bit of a low-scoring contest. With that in mind, I am going out on a limb and taking the Bengals at +6.5. I am not sure if I like the Bengals to win, but I do think it has the potential to be close down the stretch.