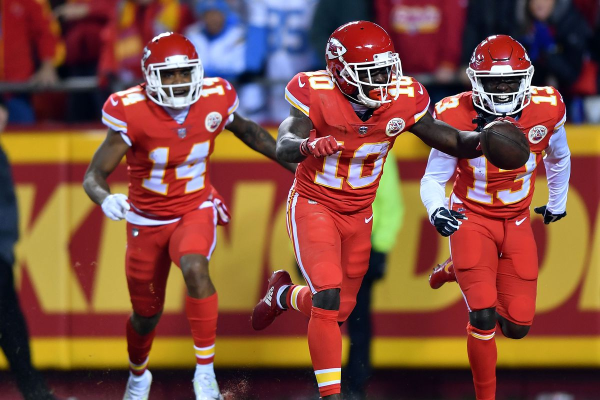 If it ain’t broke, don’t fix it. That appears to be the current motto of the Kansas City Chiefs, which will bring back all five of the team’s leading pass-catchers in an attempt to win back-to-back Super Bowls.

To do so, the Chiefs and receiver Sammy Watkins have agreed to rework his deal, creating $5 million in salary-cap space for the team. Prior to the agreement, Kansas City was working with $171 million in cap space.

Watkins’ deal now has a maximum value of $16 million thanks to the $7 million of incentives included in the contract. The new deal also includes a no-trade clause.

After a year in which quarterback Patrick Mahomes announced himself as the new face of the NFL by leading the Chiefs to a Super Bowl title with a series of postseason comebacks, why not return all of his biggest weapons for another season?

Watkins played a massive role in the AFC Championship Game in which he caught seven passes for 114 yards and a touchdown.

Because the Chiefs are handing their quarterback every one of his top five receiving threats from a year ago, there’s no reason to expect Mahomes will be anything but spectacular next season.

Perhaps that’s why Mahomes is the current favorite to win the MVP award with odds of +380. Reigning MVP Lamar Jackson is next on the list of contenders at +600, tied with Russell Wilson.

Leading the line of Kansas City pass-catchers a season ago was tight end Travis Kelce, who caught 97 balls for 1,229 yards and five touchdowns. Kelce also reeled in 13 catches of 20 yards or more, which has become a signature of the Chiefs offense.

Directly following Kelce was the speedy Tyreek Hill, who only played 12 games in the regular season. Hill caught 58 passes for 860 yards and seven touchdowns with 11 plays of 20 yards or more in the passing game.

Then came Watkins, the latest player to re-sign for another year in Kansas City. Watkins caught 52 balls for 673 yards and three touchdowns with nine receptions beyond 20 yards.

Mahomes’ next two passing game threats — Mecole Hardman and Demarcus Robinson — combined for 58 catches, 987 yards, and 10 touchdowns. The two receivers also racked up 16 plays of at least 20 yards between them.

Last season was a dream for everyone involved in Kansas City. Head coach Andy Reid brought home the Lombardi Trophy for the first time, Mahomes became the new face of the NFL, and the Chiefs won their first Super Bowl in 50 years.

Yet the fun doesn’t appear to be stopping any time soon.

With odds of +650, Kansas City is the favorite to win back-to-back Super Bowls. However, they’re trailed closely by Baltimore (+700) and San Francisco (+900).

When it comes to the AFC, the Chiefs lead the two-team race with the Ravens to defend their conference championship. While Baltimore is sitting on +420 odds, Kansas City owns odds of +300.

And the Chiefs should have very little trouble making the playoffs, especially considering the addition of another playoff position in each conference for the 2020 season. At this point, the over/under on Kansas City’s regular-season win total is 11.5 games.

With the MVP favorite at quarterback and the best odds to win the Super Bowl, Kansas City is set up for another special year.