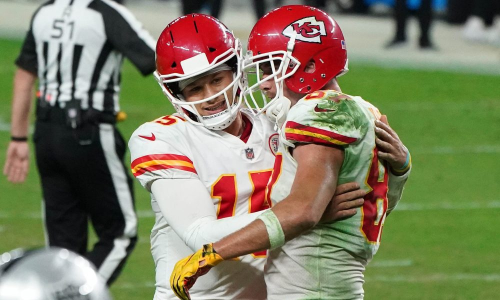 It’s a Week 12 Sunday night showdown between the reigning champions, the Kansas City Chiefs (9-1), and the Tampa Bay Buccaneers (7-4). This epic matchup will take place at the Raymond James Stadium on November 29.

The Reigning Champions on a 6 Straight Win Streak?

The Kansas City Chiefs recently tallied their 5 straight victories after winning the game against the Las Vegas Raiders. During the game, the Las Vegas Raiders took an early lead with the first quarter ending 14-7. However, the final score, 35-31, announced the Kansas City Chiefs victorious. The Kansas team’s defense had a hard time keeping the Raiders from scoring, but the offense had no difficulty scoring.

The Kansas City Chiefs on total offense have accumulated an average of 32.1 points per game. On yards accumulated per game, the team average 421.9 total yards, 308.2 yards in the air, and 113.7 yards on the ground.

This season, the Kansas quarterback Patrick Mahomes has covered 3,035 yards and 27 touchdowns with 2 interceptions. Running back Clyde Edwards-Helaire has rushed for 665 yards carrying the ball 140 times and scoring 4 touchdowns, and Travis Kelce, has secured 66 catches in 896 yards and scoring 7 touchdowns.

On defense, the Kansa City Chiefs have let an average of 21.4 points slip past them per game, in addition to an average of 365.5 total yards allowed, 232.0 in passing yards, and 133.5 in rushing yards.

The Kansa City Chiefs have nothing to worry about concerning injuries as they have no injured players so far this season. But wide receiver Sammy Watkins’ availability for the Sunday game remains in question, but he is expected to make a return.

The Buccaneers lost in Week 11, Will Week 12 be Any Different?

The Tampa Bay Buccaneers took a 27-24 beating from the Los Angeles Rams last week and will be looking to redeem themselves this week. In last week’s game, the Buccaneers ended the first quarter without even a single point on the board and went on to lose the game. In the game, quarterback Tom Brady passed for 216 yards scoring 2 touchdowns with 2 interceptions, and running back Ronald James II ran for 24 yards with 10 carries. Wide receiver Antonio Brown caught 8 throws in 57 yards.

So far in the season, the Tampa Bay Buccaneers have gained an average of 29.1 points per game. In 98.3 on the ground. Quarterback Tom Brady has passed for 2,955 yards with 25 touchdowns and 9 interceptions this season. Running back Ronald Jones II has rushed for 754 yards with 153 carries, scoring 5 touchdowns. Wide receiver Mike Evans has caught 45 throws in 563 yards with 9 touchdowns to his name this season.

On defense, the Tampa Bay Buccaneers have allowed an average of 23.0 points per game. On offensive yardage allowed, the team average 332.2 total yards, 259.2 in passing yards, and 73.0 in rushing yards.

The Kansas City Chiefs are currently topping the AFC West tables. The team continues to give the yet undefeated Pittsburgh Steelers a run for their money for the number one spot in the conference. On the other hand, the Tampa Bay Buccaneers have lost a game for the second time in two weeks due to a flawed game plan, and the team needs to smoothen out the rough edges in their offense. The Tampa Bay receiving corps is quite remarkable, actually one of the best in the league. Still, the entire offensive lineup needs some strengthening.