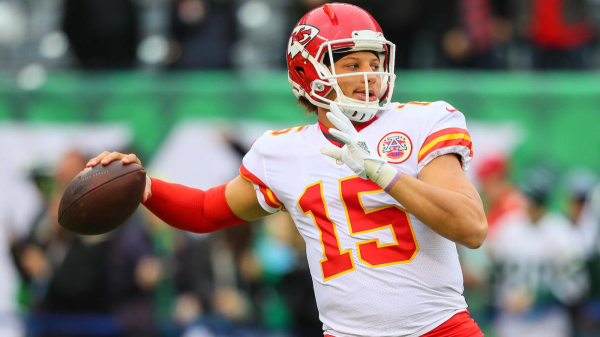 The Kansas City Chiefs will try to put some distance between themselves and the Denver Broncos in the AFC West when the teams meet on Sunday afternoon.

Kansas City (5-1) sits atop the division – two games ahead of the Las Vegas Raiders. Denver (2-3) is in third place and is in desperate need of a win if it wants to build momentum for a playoff push. The Chiefs have won nine in a row in the series.

Kickoff is set for 4:25 p.m. ET at Empower Field in Denver, Colorado.

The Broncos closed as 7-point underdogs against New England but cruised to an easy cover and an outright victory thanks to six field goals. They led 18-3 at the end of the third quarter, and the final score was 18-12.

The Chiefs also secured a cover as 4.5-point favorites in beating the Buffalo Bills 26-17 on the road.

Kansas City is a 9.5-point favorite at DraftKings and FanDuel on Thursday afternoon. The line has ticked up from Sunday’s opener. FanDuel opened at 8.5 points, and DraftKings opened at 9 points.

The two books differ slightly on the total. FanDuel lists it at 45.5 points while DraftKings has 46.

It is usually not a good idea to go all-in on a bet based on trends, but when the game pits two divisional foes against one another you can give a little more credence to those trends.

The biggest player who might miss Sunday’s game for Kansas City is WR Sammy Watkins. He suffered a hamstring injury in the Chiefs’ Week 5 game, did not play last week against the Bills, and did not practice on Wednesday.

Kansas City got some good news for its offense when third-year offensive guard Martinas Rankin returned to practice on Wednesday. Rankin was a starter last season but suffered a knee injury and was placed on Injured Reserve. This is the first time he has returned to the field, and it is not yet determined whether he will play on Sunday.

This game is tough to handicap from a side standpoint. On one hand, the Chiefs have a strong track record for covering in this rivalry. On the other hand, do you really want to stomach giving 9.5 points on the road in a division game?

The temperature is expected to fall below 20 degrees, and there is a 50% chance of snow with moderately heavy winds. Those conditions are not good for a lot of points being scored. Add to that the Broncos’ preference in blitzing a lot, and Patrick Mahomes and the Chiefs’ offense could be in for an ultra-difficult task.

Denver has started slow but has won its last two games sandwiching its bye week. Last week, the defense was especially strong in holding the New England Patriots to one touchdown and two field goals.

The Chiefs’ offense is perhaps the best in the NFL, but it just doesn’t seem like Sunday’s game is a great one for the Chiefs to score a lot of points.

In addition to taking a shot on the under, take a look at betting under on both team totals, which are 27.5 for Kansas City and 17.5 for Denver.