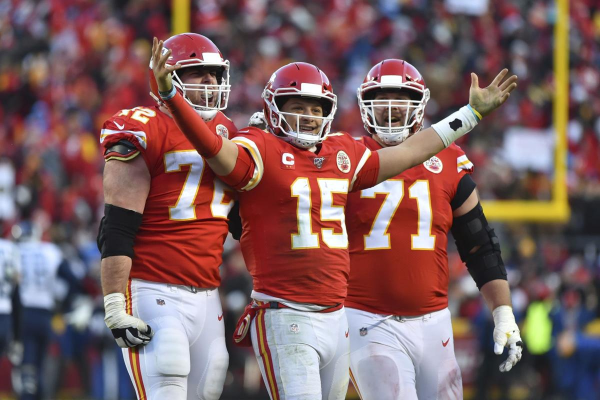 The Kansas City Chiefs began the 2019 NFL season as a Super Bowl favorite. At least for the moment, the Chiefs are the favorite once again as they head into the two-week leadup to Super Bowl LIV.

Both the San Francisco 49ers and Kansas City have played 18 games this season. While their respective conference championship games were supposed to be among their most difficult challenges, neither had much difficulty overcoming the competition.

Now, the 49ers and Chiefs are just one win away from hoisting the Lombardi Trophy.

Chiefs Rally Back Once Again

In the AFC, the Chiefs once again faced early adversity by going down 10-0 and 17-7 in the first half to the Tennessee Titans. But Kansas City was then able to flip the scoreboard by scoring the next four touchdowns of the contest and take Titans running back Derrick Henry out of the game.

Although he scored a touchdown, Henry was only able to rack up 69 yards after rushing for a combined 588 yards in Tennessee’s three previous games. Titans quarterback Ryan Tannehill had his best performance of the postseason, but his 209 yards and two touchdowns weren’t enough.

Meanwhile, Chiefs quarterback Patrick Mahomes was able to throw for 294 yards and three touchdowns, and he added another on the ground. Just before halftime, Mahomes scrambled down the left sideline and broke multiple tackles on his way to the end zone.

That score put Kansas City ahead by a score of 21-17 and shifted the momentum heavily in the Chiefs’ favor. With 28 unanswered points, Kansas City earned a 35-17 advantage in the fourth quarter and forced Tennessee to go away from Henry.

Although the Titans would add a late score, the Chiefs won the AFC Championship Game by a score of 35-24.

After taking down Green Bay 37-8 in the regular season, the 49ers were favorites in the NFC Championship Game. Although the Packers were able to score a dozen more points this time around, they couldn’t stop San Francisco from reaching 37 points once again.

The NFL is a quarterback-driven league, but the 49ers didn’t need Jimmy Garoppolo to do much while defensive end Nick Bosa harassed Aaron Rodgers all game long and running back Raheem Mostert rushed for 220 yards and four touchdowns.

In the end, the 49ers’ running game couldn’t be stopped, so Garoppolo was only asked to throw eight times. He completed six of those passes for 77 yards.

On the flip side, Rodgers was forced to throw 39 times. Yet even the future Hall of Famer wasn’t able to get the best of this San Francisco defense, as he threw two interceptions and lost a fumble.

The 49ers now join the 1988 Bengals and 1999 Rams as the only teams in NFL history to reach the Super Bowl after winning four games or fewer in the previous season.

If the odds are anything to go by, we’re in for one heck of a Super Bowl in two weeks. Just one day removed from the conference championships, the Chiefs are 1.5-point favorites in Super Bowl LIV at this stage in the leadup.

The battle for the Lombardi Trophy will pit strength against strength, as a Kansas City offense featuring Mahomes and Travis Kelce will take on a San Francisco defense featuring Bosa and Richard Sherman.

For Kansas City, which started its two playoff games with 24- and 10-point deficits, the key will be stopping San Francisco from jumping out to a significant lead that it can protect with a battering running game.

For San Francisco, the game plan will likely revolve around using that running game to keep the ball away from Mahomes and the Chiefs offense.

As we continue to dissect the biggest game of the year over the next two weeks, expect the line for Super Bowl LIV to move.