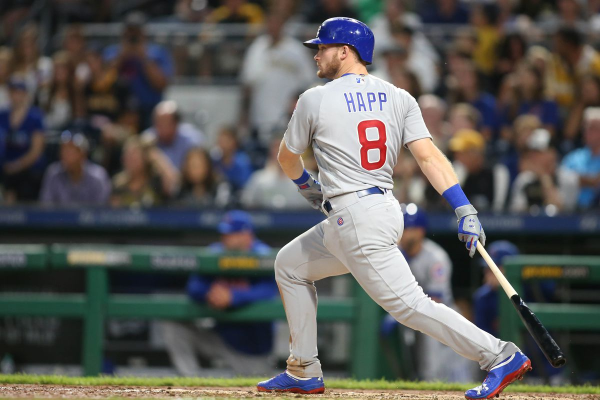 Wednesday night features an interleague battle of Central teams as the Chicago Cubs (11-3) travel to Progressive Field to take on the Cleveland Indians (10-8). It’s the second meeting of a short two-game series. First pitch is scheduled for 6:10 pm ET.

In the first game, the Cubs were able to make easy work of the Indians winning 7-1. In that game, Jon Lester went six innings allowing just one earned run while Jason Heyward homered in the win.

The Cubs currently lead the NL Central, 4.5 games ahead of the Reds, Brewers and the Cardinals. For the Indians, they sit just a game behind the Twins (half-game behind the Tigers).

According to FanDuel, the Indians come into this game as the favorite with a Moneyline of -124. The Cubs’ odds are +106 while they have a spread of +1.5. The over/under for total runs scored is 8.

On the offensive side, the Cubs hold the advantage as they currently sit 8th in the league in runs per game at 5. For the Indians, they sit in 28th, averaging just 3.47 runs per game.

On the defensive end, the Indians are the best team in MLB at preventing runs. They are currently allowing opponents an average of just 2.18 runs per game. For the Cubs, they come in 16th overall, allowing an average of 4.46 runs to opponents.

The Cubs have surprised many by jumping out to such a quick start, but it has been a mixture of solid pitching and timely offense. On the mound, Wednesday will be Kyle Hendricks. On the season, Hendricks has been solid as he is 2-1 with a 3.54 ERA, 0.93 WHIP, and has struck out 15 in 20.1 innings. He will try to keep it rolling Wednesday.

On the offensive side, the Cubs bats have gotten production up and down the lineup. They have eight players with at least two home runs. One player who has gotten off to a solid start is outfielder Ian Happ. He is hitting .325/.438/.625 with three home runs, seven runs batted in and seven runs scored.

Catcher Willson Contreras has also done well this season. In 45 at-bats, he is hitting .311/.360/.556 with two home runs, seven runs batted in and eight runs scored. While no Cub hitter has been absolutely on fire, most of their lineup has undoubtedly been producing.

Indians Trying To Bounce Back From Tuesday’s Loss

One of the best stories of the early 2020 campaign has been Carlos Carrasco. After missing parts of last season due to chronic myeloid leukemia, Carrasco has been solid this season. In his previous outing, a 13-0 win over the Reds, Carrasco went six innings, allowing one hit, four walks, and striking out 8.

Offensively, the Indians have gotten good, but not great, production from All-Stars Jose Ramirez and Francisco Lindor. Ramirez is hitting .257/.333/.486 with four home runs, 12 runs batted in and 12 runs scored. For Lindor, he is hitting just .225/.286/.394 but has three home runs and nine runs batted in. If the Indians want to contend with the Twins in the AL Central, they need more from these two and their surround cast.

Taking the Cubs With Favorable Moneyline

Initially, I was a little worried that the three games off could mess with the Cubs’ timing offensively, but the first game proved that to be untrue. With the best winning percentage in baseball, the Cubs aren’t very often seen as the underdog, and I think this is an excellent time to jump on a favorable Moneyline. For my money, I am taking Chicago at +106.