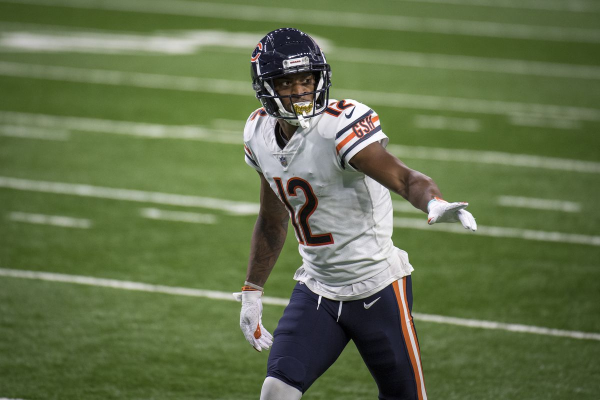 Monday Night Football features an NFC showdown as the Chicago Bears (5-1) square off with the Los Angeles Rams (4-2) at SoFi Stadium. Kickoff for this one is set for 8:15 pm ET.

The Bears come into Monday night having won five of six this season, with their lone loss being a 19-11 defeat to Indianapolis. Last week against the Panthers, Chicago snuck out a 23-16 road win. Nick Foles threw for 198 yards and a touchdown, while running back David Montgomery rushed 19 times for 58 yards in the win.

The Los Angeles Rams are coming off a disappointing 24-16 loss in Week 6 against their division rivals, the San Francisco 49ers. Jared Goff threw for 198 yards and 2 touchdowns, while Darrell Henderson led the rushing attack with 88 yards on 14 carries.

Neither of these teams have been particularly stellar this season on the offensive side of the football. The Rams rank 19th in points per game at 25.3, and the Bears are 27th overall, averaging just 21.3 points per game.

While both teams struggle on offense, this game features a couple of solid defenses. The Rams rank 5th overall, allowing just 19 points per game. The Bears are 7th, allowing an average of 19.3 points per game.

Bears Hoping Offense Can Bust Through

To this point, any success that the Bears have had has been all about their defense. Even after switching from Mitch Trubisky to Foles, their offensive woes have continued.

Since taking over at QB, Foles has thrown for 878 yards, 6 touchdowns and 4 interceptions, while being sacked 4 times. While he offers a stronger arm and better decision making than Trubisky, Foles’ accuracy has been a bit off since taking over.

Chicago’s best receiving option by far Allen Robinson. On the season, Robinson has caught 40 passes for 474 yards and 2 touchdowns.

Montgomery leads the way out of the backfield with 82 rushes for 305 yards and a score. He also has 20 receptions for 163 yards and another TD.

As expected, Khalil Mack (21 tackles, 4.5 sacks) and Akiem Hicks (23 tackles, 3.5 sacks) have led the way for the defense. In the secondary, Tashaun Gipson leads the team in interceptions with 2.

Rams Look To Bounce Back After Rough Week 6

After a disappointing loss to the 49ers last week, the Rams will be focused to come out and try to bounce back in a big way. Goff leads the way for the Rams offense with 1,570 yards, with 10 TD to 4 INT.

Darrell Henderson has led the way on the ground with 72 rushes for 348 yards and 3 touchdowns.

Aaron Donald just continues to terrorize opposing offenses, with 19 tackles and 75 sacks. In the secondary, Darious Williams leads the team with 2 interceptions.

Rams To Win, But Can They Cover

Both of these teams have top-notch defenses, but it is the Rams who have the edge on offense. I have the Rams coming out with a purpose after last week’s loss, and finding a way to win this one.

The real question, though, is the spread. With an over/under set at just 44.5 points, that doesn’t leave a lot of wiggle room for a spread as big as 6. I like the Rams to win outright, but I think I am taking the Bears to cover the 6 points. The Bears have not won or lost a game by more than 8 points and 4 of their 6 games have been decided by less than 6 points.