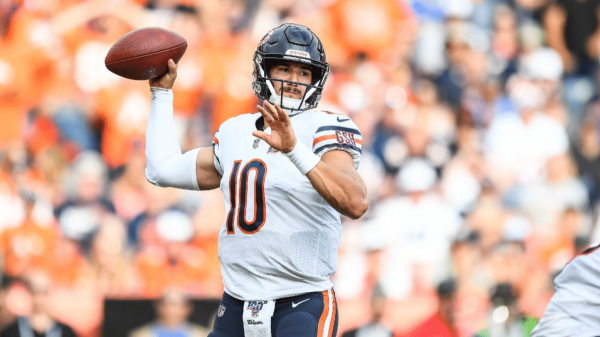 Monday Night Football comes to the nation’s capital as the Chicago Bears (1-1) travel to FedEx Field to take on the Washington Redskins (0-2). The Bears have Super Bowl aspirations after winning the NFC North last season, while the Redskins, after going 7-9 last season, are looking for some marked improvements this year.

Coming into Week 3, the Bears currently sit at 1-1. They lost their opener 10-3 against the division rival Green Bay Packers and bounced back to win last week 16-14 with a last-second field goal by kicker Eddy Pineiro. While the defense has shown its dominant ways, the offense needs to kick it into gear for them to truly be contenders in the postseason.

The Redskins, on the other hand, come into this one with some work to do. They lost their opener to the Philadelphia Eagles 32-27 and lost again to the Dallas Cowboys in Week 2 31-21. With two division losses, the Redskins would love to take advantage of a struggling Bears offense to pick up their first win.

The point spread for this one currently sits with the Chicago Bears being 4.5-point favorites despite playing on the road. The over/under on total points scored is set at 41.

Only two weeks in, the numbers can still be pretty skewed due to low sample size, but as of right now, the Redskins are the better of the two offenses. They currently sit ninth in the NFL in points scored, averaging 24 points per game. The Bears come in 31st, averaging 9.5 points per game.

Bears Look To Get Offense Going

While the defense has been as advertised, Mitch Trubisky and the Bears’ offense need to start picking it up. On the season, Trubisky is just 42 for 72 for only 348 games. Through two games, he has yet to throw a touchdown pass and has thrown one interception. He has also been sacked five times.

In terms of his targets, it has seemingly been all Allen Robinson (11 catches for 143 yards) and Tarik Cohen (10 catches for 56 yards). They are the only two with double-digit receptions and seem to be the focus of the passing game. Trubisky and company will hope to take advantage of a very week Washington secondary.

It did appear in last week’s win that the Bears were more apt to get the ground game going. Currently, David Montgomery leads the way for the backs with 24 rushes for 80 yards and a touchdown. Mike Davis comes in second with eight rushes for 20 yards.

On the defensive side, Roquan Smith leads the team with 18 tackles. Other stat leaders include Leonard Floyd (two sacks) and Kyle Fuller (one interception). With Smith, Floyd, Fuller and players like Khalil Mack and Akiem Hicks, this defense has the potential to do special things.

Offensively, the passing game hasn’t been too bad through two games. Case Keenum is 56 for 81 for 601 yards, five touchdowns and no interceptions. He has also only been sacked twice. Chris Thompson (12 catches, 116 yards) and Terry McLaurin (10 catches, 187 yards, two touchdowns) lead the way on the receiving side.

While the passing game has been strong, the Redskins’ running game has struggled. Adrian Peterson leads the way but has only rushed 10 times for just 25 yards and a touchdown. That is right, 25 yards is currently the lead through two games. Derrius Guice also rushed 10 times for 18 yards before being placed on injured reserve. Needless to say, the Redskins will need to get the ground game going to have success.

Defensively, the stat leaders for the Redskins include Landon Collins (19 tackles), Ryan Kerrigan and Casanova McKinzy (one sack each) and Montae Nicholson (one interception).

This week seems to be just what the Bears could use. The Bears defense should be able to slow down Keenum and what has been an almost non-existent running game. More importantly, though, with a struggling Redskins defense, the Bears offense might be able to get some traction and deliver.

I am not shocked that the over/under is 41 points because I could see this one being low scoring (although I still might bet the over), but I do think the Bears not only win, but they cover the 4.5 points as well.