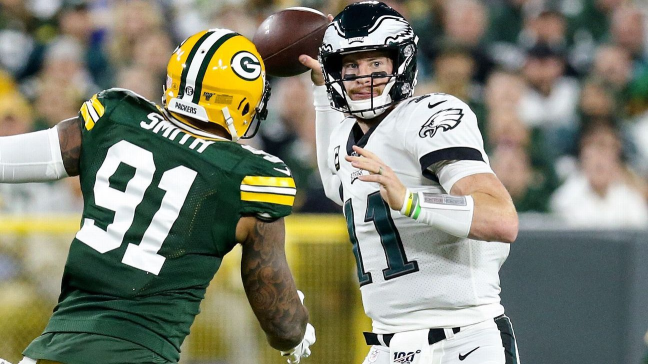 The Philadelphia quarterback, Carson Wentz, has had a terrible start to the season so far. He, however, took responsibility for his struggles at a team press conference late last week. His teammates appreciate this unsolicited gesture as much as they admire him as a person.

Wentz, who is in the middle of his fifth season with the Philadelphia Eagles, remarkably has a good upturn in interceptions as he ranks first in that department with 15 interceptions and 46 sacks. Wentz has completed a measly 58.1% of his passes in 2,541 yards, with 16 touchdowns. While there is no clear reason for his struggles, the head coach, Doug Pederson, has reiterated his stance on the quarterback’s involvement in the team.

One would imagine that with his recent struggles, another player will be given a chance to help the team. Doug has repeatedly stated that he has no plans to take off the 27 years old from being the team’s starting quarterback, despite his poor outings and the presence of a dependable Jalen Hurts on the bench. It seems like it would take some time and some convincing before Hurts can get into the first team. However, if Wentz’s struggle continues, then it will only be a matter of time before he is replaced.

Pederson, who was impressed by the move of the quarterback said that he could become a better teammate to his colleagues by being a little vulnerable and accessible. He went on to say that the move made by Wentz is a clear sign of development. He said that for the quarterback to take responsibility for his struggles and show vulnerability is a sign of growth and that Wentz understands that he has to be better, play better.

Pederson, however, could not help but take some credit for the quarterback’s public show of vulnerability as he said that they both had conversations over the past month and that those conversations could be responsible for pushing him in that direction. Pederson extended praises to his young players, stating that they are all showing signs of maturity, growth, and good leadership quality, especially his quarterback, Wentz, who he said is young regardless of being 27 years of age, as he is only in his fifth year.

While it may seem like Wentz’s job and position in the team is secured, the owner of the Philadelphia Eagles, Jeffrey Lurie, has been very vocal with his frustration with the team. And as such, there might be a change soon, especially a possible quarterback shift.

There exist a long list of possible replacements that could be exploited during the offseason, which includes Cam Newton, Mitchell Trubisky, Dak Prescott, Jacoby Brissett, Phillip Rivers, and Tyrod Taylor. Any one of these options could give the Eagles a fighting chance, but the decision lies solely in the hands of the management of the Philadelphia Eagles.

Wentz could be given a second chance come next season as he would not be a free agent not until 2025. But if he fails to prove his worth on the pitch, he will most likely be dropped.