Can the Denver Broncos upset the NFL’s hottest team, the Miami Dolphins? 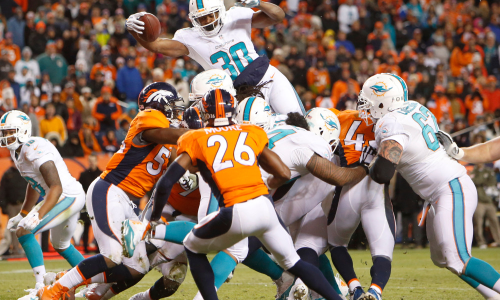 The 6-3 Miami Dolphins travel to Denver this Sunday, November 22nd, to take on the 3-6 Broncos. Kickoff is scheduled for 1:05 p.m. PST, and the game will air on CBS; this will be the final Broncos home game to allow fans they begin more intensive Covid-19 protocols.

The Dolphins have been one of the NFL’s biggest surprises this year; after a 1-3 start, the Dolphins have pulled off five in a row. Their last loss came against the Seattle Seahawks back on October 4th, in Week 4. The Broncos have won two of their past five games, losing their previous two against the Atlanta Falcons and Las Vegas Raiders.

Although the Dolphins have been on a tear, their offense ranks bottom-five in the league in yards per game at 318.1. They move the ball efficiently and capitalize off of good field position, averaging 27.9 points per game. Their last three wins have been behind rookie quarterback Tua Tagovailoa who has proven himself as a capable starter in the NFL thus far.

The Dolphins’ backfield has suffered from injuries; starter Matt Brieda has been hurt, and his replacement Myles Gaskin was recently placed on the IR. Filling in late has been rookie Salvon Ahmed who has been effective with his touches the past two weeks, picking up 128 yards on 28 carries with a touchdown. He will be important this game as the Broncos have one of the league’s worst rush defenses, giving up 128.8 yards per game. This will help Tua find his groove in the passing game and open up space for their leading receiver DeVante Parker.

Miami bolsters one of the NFL’s most formidable defenses; it is the strong-suit of this team. They are top-five in the league in points allowed per game at 20.2. Helping lead the way is shutdown cornerback Xavien Howard; he is tied for a league-high five interceptions. This defense will present a challenging task for the Denver offense.

The Broncos have lacked great quarterback play for much of the season; Drew Lock is averaging only 223 yards per game with a negative touchdown to interception ratio of 7 to 10. His performance will be detrimental for the Broncos if they hope to pull this one out; look for Denver to establish running back Melvin Gordon early to help take the pressure off their young quarterback. Gordon is the best player the Broncos have on offense; they will need all they can get from him. He is averaging 4.1 yards per carry on 107 attempts for 439 yards and four touchdowns.

Lock has weapons at the wide receiver position also, in Jerry Jeudy and Tim Patrick. Both of these players are dynamic and can help the Broncos win if they receive the opportunities. 28 of Jeudy’s 34 catches this season have resulted in first downs.

The Denver linebackers will need to have a big game if they hope to stop the Miami offense. Their three linebackers, Alexander Johnson, Josey Jewell, and Bradley Chubb, are the strength of their defense and could prove to be the key to shutting down the Dolphins attack. They will need to play better than their average, which is 28.2 points allowed per game.

There are two players listed as questionable for the Dolphins; guard Solomon Kindley and linebacker Kyle Van Noy.

For the Broncos, linebacker Joe Jones has been ruled out. The following players are questionable; quarterback Drew Lock, tight end Noah Fant, guard Graham Glasglow, and defensive lineman DeShawn Williams. If Lock is unable to go, second-year quarterback Brett Rypien will get the start.

This game will boil down to how well Drew Lock and the Broncos can perform on offense and take advantage of their opportunities against a tough Miami defense. The Dolphins offense has proven to be capable of high scoring games behind Tua. If the Broncos fail to perform offensively, the Dolphins will pull away, and the defense will buckle down and begin sending the heat. Look for Miami to make it six wins in a row as they have the favorable matchup in this one.