Burrow Elects Not To Throw At NFL Combine 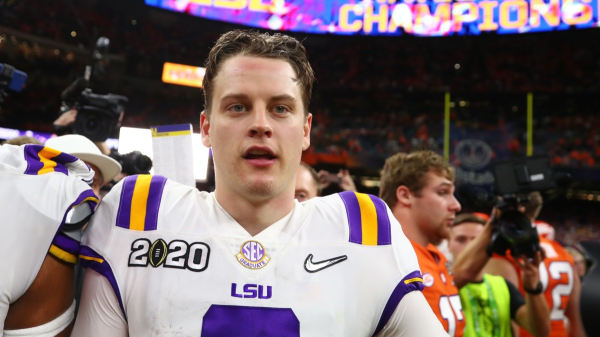 After leading LSU to a national championship, quarterback Joe Burrow has turned his attention to the NFL Draft. With all NFL eyes turning to the combine, Burrow has decided not to throw or participate in workouts.

Burrow’s decision comes as no surprise, as it follows a trend for quarterbacks expected to be drafted very early on. Instead of throwing to different receivers in unfamiliar conditions, Burrow could opt to throw to his own receivers on his home field during LSU’s Pro Day.

From Burrow’s perspective, there’s nothing to be gained from throwing at the combine. As the presumptive first overall pick in this year’s draft, the Heisman Trophy winner wouldn’t be able to improve his draft stock.

With a bad performance, however, Burrow could easily hurt his draft stock, especially after some are voicing concerns over Burrow’s hand size.

While other top quarterback prospects like Tua Tagovailoa and Justin Herbert both measured in with 10-inch hands, Burrow’s nine-inch measurement is considered small for QBs. In fact, Burrow’s hands tied for the smallest combine measurement among first-round quarterbacks since 2008.

How Burrow Became the Presumptive No.1 Pick

It’s not hyperbolic to say that Burrow came out of nowhere in the 2019 college football season. In 2018, the LSU man was pedestrian at quarterback.

In the 2018 season, Burrow completed 57.8% of his passes for 2,894 yards, 16 touchdowns, and five interceptions. Those numbers kept Burrow in the shadows while guys like Tagovailoa became household names.

Then we all saw Burrow’s breakout year a season ago. While completing an astronomical 76.3% of his passes, the LSU quarterback threw for 5,671 yards with 60 touchdowns and just six interceptions.

In addition to those statistics, Burrow won the Heisman Trophy and led the Tigers to a College Football Playoff Championship over Clemson.

With 60 touchdown passes, Burrow had 12 more than any other quarterback in Division I football. His 5,671 yards also topped the charts for college football quarterbacks in 2019, although Washington State’s Anthony Gordon had more yards per game.

Throughout the season, Burrow set records and filled up the trophy case as he burst into the NFL Draft scene and surpassed every one of his peers along the way.

Now, Burrow is expected to be the first player taken in the 2020 NFL Draft.

Burrow Set to Lead Off Draft

Unless Burrow decides to take a stand and explicitly say he won’t play for Cincinnati, who own the first overall pick in the draft, it’s highly likely that he’ll soon be wearing the orange and black of the Bengals.

While some have speculated that he could follow in Eli Manning’s footsteps by demanding a trade before being selected, Burrow continues to voice his intent to play for whoever drafts him.

“Yeah, I am a ballplayer,” Burrow said. “Whoever picks me, I am going to show up.”

If that’s the case, there’s very little standing in the way of the Bengals taking Burrow with the No.1 pick in the 2020 NFL Draft.

Burrow to Cincinnati looks like even more of a lock according to the odds, which have the former LSU quarterback at -10000 to be taken first overall. By those odds, a $100 bet would earn you a single dollar.

But what if the Bengals are concerned about hand size? What if Burrow is saying all the right things publicly, but telling Cincinnati he isn’t going to play for them behind closed doors?

Sure, these are longshots, but if the Bengals don’t go for Burrow and don’t trade the pick away, who’s next?

At +1200, Ohio State defensive end Chase Young is second on the list of players to be drafted first overall. This comes as no surprise with many draft analysts considering Young the best player in the class.

Behind Burrow and Young are the other two top quarterbacks, with Tagovailoa currently sitting on +2500 odds and Herbert sitting on +4000 odds to be taken with the top pick.