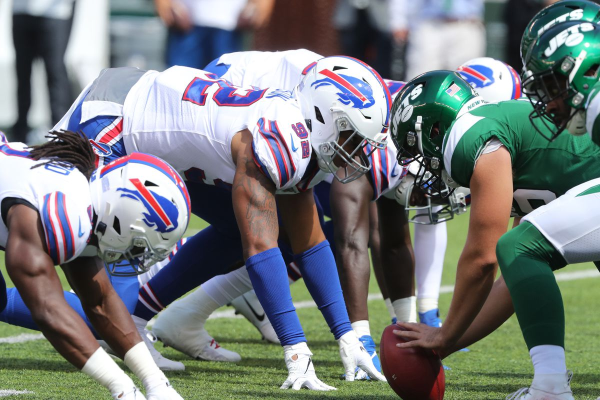 It is going to be an interesting NFL season for a lot of reasons. One of them is that it does not seem a foregone conclusion that the New England Patriots are going to win the AFC East, for the first time in seemingly forever. Buffalo, who made the playoffs last season, is hoping to take the division, but the gap between them and the New York Jets and Miami Dolphins is not huge.

The Bills are better on defense than those two teams and a little more settled at quarterback, but Josh Allen is far from a sure thing. This early divisional game is going to go a long way towards seeing where these teams are at. If the Jets win, maybe they are ready to make more of a leap this season, though I think that is unlikely.

The Bills have some amazing continuity this season. They have all 11 of their offensive starters returning and 10 on defense. Their coach Sean McDermott is in his fourth year too.

To that mix the Bills added WR Stephon Diggs to be a top target for Allen. He is probably the best target Allen has ever had.

Buffalo had the second best scoring defense in the NFL in 2019. They lost DE Shaq Lawson from that group and DT Star Lotulelei has elected to sit out the season. They need top rookie DE AJ Epenesa to fill some of that missing production.

QB Sam Darnold was drafted ahead of Josh Allen in the same draft but the latter has outplayed him so far.

New York was last in yards per game and second to last in scoring offense last year. The offense has to improve quite a bit, to put it mildly.

10 starters return on a defense that was second in the league against the run last season. That missing starter is Jalen Adams though, one of the best safeties in the league.

These teams met in week 1 and week 17 last season, both low scoring games won and covered by the visiting teams. I am expecting that Buffalo is going to get off to antother strong start this season, they were 3-0 last year. Being at home will help and the continuity they have on both sides of the ball will be advantageous to a quick start. New York has a lot of continuity too but they do not have as much talent. Buffalo has the better quarterback and more complete offense and I just love their defense. New York might be improved but that is not something I want to bet on to start the season. I am expecting them to start slow in this one and with some newfound explosiveness from Buffalo, the Jets get down a little too much too early. This one is probably even in the second half but by then the damage might be done.

I am very solid on the Bills winning at home in the season opener. Their home field advantage is a little bit nullified given the circumstances, but I think lots of things are going to feel weird that first week so all their continuity will make it extra comfortable. Don’t get lured in by the fact that the Jets won at Buffalo to close the regular season. It was a meaningless game. This would have to get closer to +300 for me to consider moving off of the Bills.

This is one of the lowest totals of week 1. Last year, these teams met twice and the totals were 41 early on, and 37 at the end of the season, a meaningless game for both. Both of those games went under the total, so the fact that we are getting a small number is not a surprise here. I do think that Buffalo is going to be better on offense this season and more explosive too. With Diggs and more carries for shifty RB Devin Singletary, there will be more big plays, and big plays make it easier to score points. For New York, I am not sold on Darnold, and RB Le’Veon Bell was a bust last season. I don’t think they have done enough to improve the offense overall and in week 1 they are likely to be sluggish. The Bills look better on offense, but the Jets offensive struggles make the under a good play here. Look for a final in the 28-10 range.

Tonight, two pitchers whose records could use a little polishing match up as the St. Louis Cardinals welcome the Miami Marlins to Busch Stadium to open a three-game series. Cardinals hurler Adam Wainwright has not picked up a win since May 20, while Pablo Lopez’s win in his most recent start last week was his END_OF_DOCUMENT_TOKEN_TO_BE_REPLACED