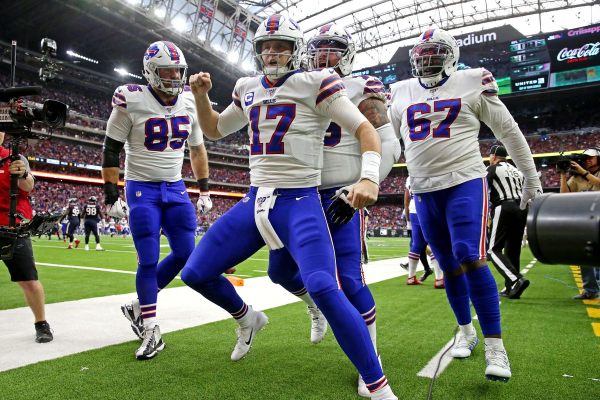 We should know a lot more about both the Buffalo Bills and the Las Vegas Raiders after this weekend’s meeting. The Bills will make their first-ever trip to Allegiant Stadium as 3-point road favorites with an over/under of 53 points.

The Raiders have been a bit of a surprise after starting the season 2-1. Jon Gruden’s team knocked off the Panthers and Saints in the first two weeks, but fell back to earth with a 36-20 loss to the Patriots last week.

Things don’t get any easier for the Raiders, as they match up with two straight undefeated teams. After the Bills visit in week 4, Las Vegas has a showdown with the Chiefs on tap next.

The Bills sit at 3-0 as we move into October. Buffalo’s schedule hasn’t exactly been the most challenging, but the Bills have taken care of the lowly Jets and Dolphins before winning a wild game with the Rams last week. Buffalo blew a big lead and also came from behind to beat Los Angeles in week 3.

The difference between Josh Allen the past two seasons, and the QB manning the Bills this year has been like night and day. Allen has looked like a legitimate MVP candidate so far, throwing for 300+ in each game while totaling 10 touchdown passes and just one interception.

The addition of Stefon Diggs has helped the offense immensely, as the Bills have a bona fide no. 1 receiver for their young quarterback. Allen’s accuracy and poise have also improved, while he maintains his ability to make plays with his legs.

Part of Allen’s offensive success also has to do with the fact the Bills haven’t played any quality defensive teams thus far. The Raiders don’t exactly fit that bill either though.

The Las Vegas defense is giving up an average of 30 points per game, which is a lot for a team that’s 2-1. The Raiders don’t get a ton of pressure either with just three sacks on the the year. Based on Allen’s play early in the season, if the Raiders can’t apply the heat, it will be another big day for Diggs and the Bills’ receivers.

The reason the Raiders are 2-1 despite their defense having some struggles is because they have a top-10 offense. The Las Vegas offense has been surprisingly balanced with Josh Jacobs carrying the load with 252 yards rushing.

Derek Carr has been steady as well, completing 74% of his passes with no interceptions. The Raiders still don’t have much of a downfield passing attack while they wait for rookies Bryan Edwards and Henry Ruggs to develop and also get healthy. Tight end Darren Waller, and slot receiver Hunter Renfrow have done a nice job of keeping the Las Vegas offense running in the meantime.

Across the field, the Buffalo defense has been a bit of a disappointment this year. They began the year with a lot of bravado, but have conceded 60 points over their last two games. The Bills should be concerned about a big day from Jacobs after Darrell Henderson topped 100 yards for the Rams last week.

While Jacobs and the Las Vegas offense have a chance to do some damage, the Raiders have too many concerns defensively. There’s no reason to think that Allen won’t have another big game, and lead the Buffalo offense into the end zone a few times. Carr and company won’t be able to match that. Bet on the Bills to win and cover in Week 4.