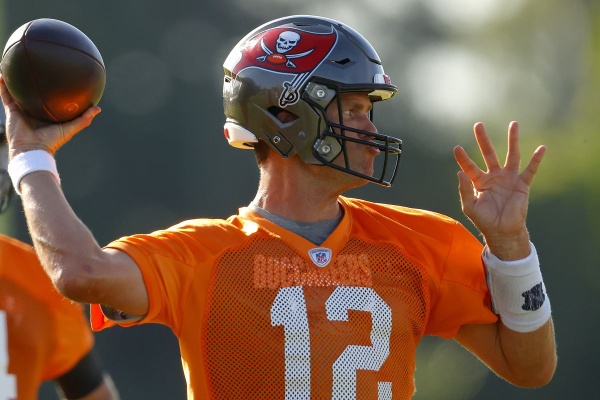 Tom Brady and Drew Brees begin their 2020 NFL season with a Week 1 matchup. The only catch is that it won’t feature the New England Patriots.

Instead, Brady makes his debut for the Tampa Bay Buccaneers in New Orleans against Drew Brees and the Saints. The Bucs could be without star wideout Mike Evans (hamstring), while the Saints will feature a debut of their own on the outside in wide receiver Emmanuel Sanders.

This game kicks off at 4:25 p.m. Eastern on Sunday, Sept. 13, as the biggest and most high-profile late afternoon game. Both DraftKings and FanDuel’s sportsbook list the Saints as 3.5-point favorites. The over/under total is 47.5 on FanDuel and 48.5 on DraftKings.

Without a preseason due to the COVID-19 pandemic, bettors could worry about Brady’s acclimation to a new team and to Bruce Arians’ offensive system. That’s a cop out, though. Brady is the greatest quarterback of all time for more reasons than just Bill Belichick and the Patriots. Consistently, season after season, Brady makes those around him better.

It’s been a long time since Brady’s had as many weapons as he does now. Even if Evans doesn’t play, Brady’s got star receiver Chris Godwin to throw to on some of the shorter routes that Brady has made such a part of his repertoire. The Bucs have three starter-level tight ends in O.J. Howard, Cameron Brate and Brady’s old friend, Rob Gronkowski. They just signed former No. 4-overall pick Leonard Fournette to boost their running game, too.

This is the same offense that saw Jameis Winston lead the NFL in pass attempts and passing yardage in 2019. Substituting in a much more consistent quarterback in Brady compared to the streaky Winston can only improve this offense.

The Saints went 6-2 at home last year and consistently benefit from one of the best home crowds in football. Studies over time have proven that home crowds don’t so much affect the players as they do give an edge to the officiating. But there’s tangible evidence that home field matters.

Due to the coronavirus pandemic, though, the Saints will be playing their Week 1 game without fans. For at least a few weeks, it’s likely that bettors will fall into the trap of favoring the home team, despite some teams, like New Orleans, not playing with fans. It’s probably not nothing that the Saints get to dress in a familiar locker room and take a familiar trip to the stadium. But with no crowd and no preseason, expecting home-field advantage to play a major role is probably foolish.

If you hadn’t caught my drift by now, this should cement why the Buccaneers are a solid upset pick on the moneyline in Week 1.

In 2019, Tampa Bay allowed 3.0 yards per carry to running backs, the best rate in football. The Bucs’ defensive line was a big of a surprise, but it produced week-in and week-out. The Saints have two great running backs in Alvin Kamara and Latavius Murray, but their influence on the game should be limited by Tampa’s run defense.

Once the Saints are stuck passing, Shaq Barrett will pin his ears back and get after Drew Brees. He led a pass rush that recorded 47 sacks a year ago, top-10 in the NFL. Brees does a good job of getting the ball out quickly, but that won’t mean that the Bucs’ front seven hasn’t seriously altered New Orleans’ game plan. If the Saints can’t effectively run the ball, and Brees can rarely look to throw down field, it’ll be a tougher day than usual for Sean Payton’s offense.

Bets to play on Buccaneers-Saints

So I said it a little higher up – the first bet you should place on this game is Tampa Bay winning outright. That’s currently listed as +152 on FD and +148 on DK. A Brady-led offense will surely be in the game late, and when it’s Brady himself leading the potential game-winning drive, you can definitely have some confidence.

It’s also worth playing the over on both sites. These teams should combine for 50 points in what will turn into a shootout. With Fournette not yet fully up to speed on one side and the Bucs’ strong run defense on the other, neither team should worry too much about running and will instead air it out.

Finally, it’s worth playing the over on Michael Thomas’ reception total. It’ll be a high number, likely approaching double-digits, but he’ll serve all game long as Brees’ outlet against a consistent pass rush. DK and FD have yet to list player props for the game, but as long as you’re playing over on a single-digit, it’s worth pursuing as Thomas has a good chance of seeing 15 targets and catching 10 of them Sunday.