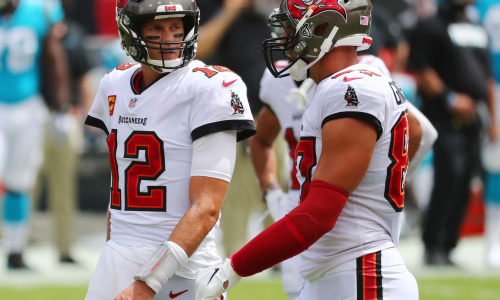 Fresh off their first win in the Tom Brady era, the Tampa Bay Buccaneers will try to build some momentum with a road game against the beleaguered Denver Broncos.

That leaves Jeff Driskell to assume the role of starting QB. Luckily, he’ll get a home game to try to get off to a good start.

Kickoff is set for 4:25 p.m. ET at Empower Field at Mile High in Denver, Colo.

Tampa Bay started fast and led the Carolina Panthers 21-0 at halftime, but the Buccaneers needed a long touchdown run by Leonard Fournette in the final two minutes to cover the 7.5-point closing spread. The final score was 31-17.

Despite the landslide of injuries, the Broncos played a strong second half against the Steelers. They trailed 26-14 when Driskell passed to Melvin Gordon for a touchdown in the final eight minutes to cover the closing spread of +6.5. That final was 26-21 in favor of the Steelers.

DraftKings and FanDuel both opened Tampa Bay as a 6-point favorite on Sunday, and that line is down to 5.5 on DraftKings and 5.0 on FanDuel as of Friday night.

The total opened at 44.5 at both books, and it has ticked down to 42.5 on FanDuel and 43 on DraftKings as of Friday night.

The ATS (against the spread) and over/under betting trends for both teams provide a lot of conflicting information that makes this one difficult to handicap.

Broncos QB Jeff Driskel’s passing completions total at DraftKings is 18.5 and the over is juiced to -130. A bet on the over might be worth it here because the Broncos showed they’re not afraid to have Driskel sling it. He didn’t enter the game until there were four minutes left in the first quarter last week, and he threw 34 times with 18 completions.

Buccaneers QB Tom Brady is still pretty good, but he’s not the superstar he used to be. Counting last season, he has thrown an interception in four consecutive games. That includes three in his first two games with Tampa Bay. Don’t be afraid to take a chance on his interception total over 0.5. At DraftKings you can get that at +127.

Buccaneers starting WR Chris Godwin (concussion) missed last week’s game, but he has practiced all week and is expected to play Sunday.

In addition to the important players already known to be out for the Broncos, CB Davontae Harris (knee) did not participate in Friday’s practice and is listed as out for Sunday. Rookie WR Jerry Jeudy (ribs) was a full participant in practice Friday, but he is listed as questionable.

The Broncos may be losing key players all over the place, but that has not stopped them from covering both of their games so far. They have done that against two good teams in the Steelers and Titans because of their defense. Sometimes injuries have a way of galvanizing a team, especially in a league in which seldom-used players often rise to the occasion.

Driskel is not a household name, but neither is Drew Lock. Driskel showed last week he can perform at an adequate level, and that might be all the Broncos need him to do if their defense continues to play so well.

The Buccaneers are a sexy team now that Brady is their QB, but they did not look strong in the opener against New Orleans and let winless Carolina get back into the game in the second half last week.

We recommend a play on the Broncos +5.5.