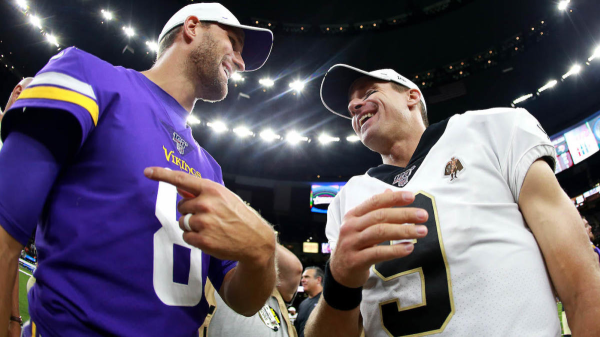 The New Orleans Saints hope Christmas Day delivers an end to their two-game losing streak when they host the Minnesota Vikings as 6.5-point favorites at 4:30 pm ET.

The Saints (10-4) hold a one-game lead over Tampa Bay in the NFC South and saw star quarterback Drew Brees return to the lineup last week. The Vikings (6-8) also have dropped two in a row and their playoff hopes are all but lost, as they trail Arizona by two games for the NFC’s final wild-card spot.

Brees Looks to Find his Stride After Spell on the Shelf

Brees passed for 234 yards and three touchdowns in last week’s 32-29 loss to defending Super Bowl champion Kansas City, after missing the previous four games with a punctured lung and fractured ribs. He was rusty, completing just 15 of his 34 pass attempts and throwing an interception. FanDuel has the Over/Under for his total passing yards against Minnesota set at 256.5.

The Saints receivers are depleted heading into the next-to-last regular season matchup. Michael Thomas and Deonte Harris are on injured reserve for the rest of the regular season, while Tre’Quan Smith’s status for Friday is up in the air after he injured his ankle against the Chiefs. Running back Alvin Kamara leads the Saints in rushing (777 yards) and receiving (739 yards), and a big game from him would take the pressure off Brees and help the Saints reach the Over for the home team points total (29.5).

The Vikings overcame a slow start to the season by winning five times during a six-game stretch, averaging 27.3 points in that span. But Minnesota has scored just 41 points in losses to Tampa Bay and Chicago, and allowed 146 rushing yards to Chicago’s David Montgomery in last week’s 33-27 defeat. Minnesota’s defense has surrendered 11.5 yards per pass reception, tied for 26th in the league, and standout linebacker Eric Kendricks – who has missed three games in a row – did not practice Tuesday.

Running back Dalvin Cook holds the key to the Minnesota offense. He ranks second in the league in rushing yards (1,484) and has rushed for 100-plus yards eight times this season, finishing with 132 yards and a touchdown on 24 carries last week. Quarterback Kirk Cousins is eighth in the league with 29 touchdowns, passing for three scores in six games, and his Over/Under for touchdown passes is 1.5.

Betting Advice for Vikings vs Saints

Last week’s setback to Kansas City was just the Saints’ second home loss in seven games this season. There predictably was some rust from Brees. But facing the Vikings defense on Christmas feels like a gift for the veteran quarterback, who completed 76.2 percent of his passes with 11 touchdowns and two interceptions in five games before being injured November 15 against San Francisco.

With Brees now back and with a game under his belt, he will exploit the Minnesota defense as the Saints pull away and easily cover.

Taking the Over on Brees touchdown passes (2.5) also feels like an easy pick.