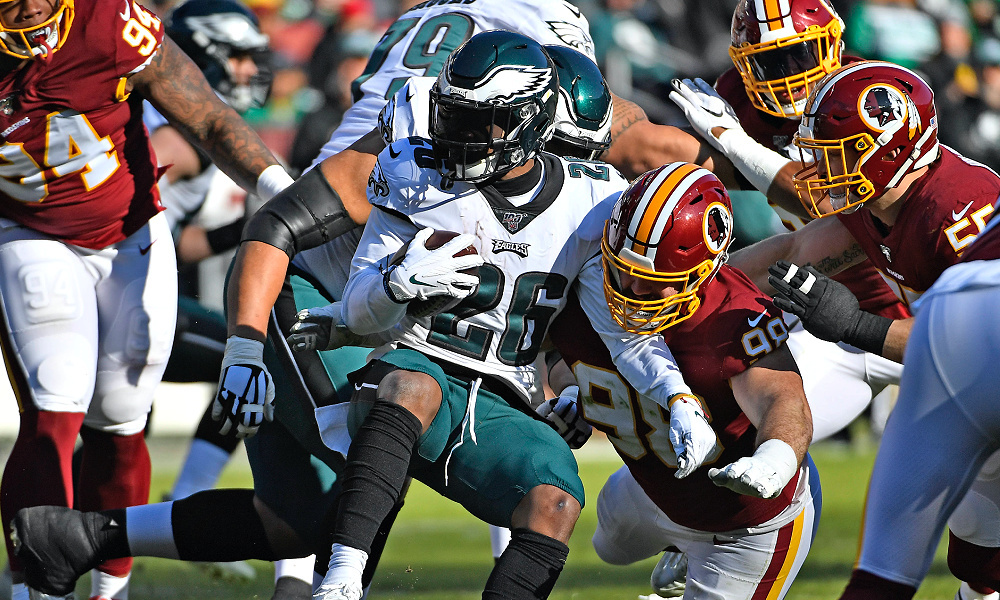 The most interesting and wide-open divisional race in the NFL will come down to the final game of the regular season, as the Washington Football Team visits the Philadelphia Eagles. By the time Washington (6-9) and Philadelphia (4-10-1) kick-off at 8:20 pm ET on NBC on Sunday night, Washington will know whether it will be the Dallas Cowboys or New York Giants that they must beat out for their first NFC East title since 2015.

The Cowboys (6-9) and the Giants (5-10) face off at MetLife Stadium at 1 pm ET. Whoever wins the game will need the Eagles to play spoiler, so there will be a nervous wait for someone deep into Sunday night. Washington could have already sealed the deal, but back-to-back home losses to Seattle and Carolina leave three teams with a shot to claim the division. The Eagles are not a part of that fight, but they can still have a say in how the race plays out.

Washington has had an interesting first season under coach Ron Rivera, to say the least. They started 2-7, then won four in a row to move to the top of the NFC East. Now, after their consecutive home losses, they have one game left with everything riding on it. If they are going to win it, they may have to do it with their fourth starting quarterback of the season.

Dwayne Haskins, Jr. started the first four games of the season before being benched for Kyle Allen, who then started the next four games before suffering a dislocated ankle in a Week 9 game against the Giants. Alex Smith made his comeback in that game and started the next five games before being forced out of their Week 14 game against San Francisco. Haskins then took over and started against Seattle and Carolina, but was benched late against the Panthers in favor of Taylor Heinicke, who had not played in a regular-season game since 2018 with the Panthers. Haskins was released on Monday, bringing an end to his time in Washington after less than two seasons.

Smith is expected to start against the Eagles, but if he cannot, Heinicke, who went 12 of 19 for 137 yards and a touchdown in his two drives, would make only his second NFL start. In seven games, Smith has completed 66.4% of his passes for 1,420 yards, four touchdowns, and six interceptions. Washington’s best bet is with him under center, given his level of experience. Smith is 98-67-1 as a starting quarterback in his NFL career, including 4-1 with Washington this season.

The defense has led the way for Washington this season and will need to step up again against the Eagles, who they beat 27-17 at home in Week 1. In that game, Washington forced three turnovers, sacked Carson Wentz eight times, and held the Eagles to only 265 total yards. Washington is third in the league in passing yards allowed per game (198.0), fourth in yards allowed per game (310.5), fifth in points allowed per game (21.0), sixth in sacks (44), and tied for seventh in interceptions (14). Second-year stud Montez Sweat (40 tackles, 13 tackles for loss, eight sacks) and rookie rusher Chase Young (42 tackles, 11.5 tackles for loss, 6.5 sacks) have had strong seasons, while cornerback Kendall Fuller leads the team in interceptions with four.

Offensively, Washington ranks low in all of the important categories. If there is one bright spot, it is rookie running back Antonio Gibson, who has run for 720 yards (on an average of 4.8 yards per carry) and 11 touchdowns and has caught 43 passes for 241 yards, immediately justifying why he was drafted in the third round as a running back after starring as a receiver, return specialist, and running back at Memphis.

Expectations were high for the Eagles after winning their second NFC East title in three seasons. However, they have been one of the season’s major disappointments. For a brief period, it looked like they would overcome a poor start to be the best of a bad bunch in the NFC East, but that has not proven to be the case. Last Sunday, the Eagles fell 37-17 at Dallas to be eliminated from the division title race.

There are many reasons why the Eagles have struggled this season, but it appears that they may have found their quarterback of the future. Carson Wentz was supposed to be the quarterback of the present and future, but he underperformed his way out of the starting lineup.

In has stepped rookie Jalen Hurts, and Hurts has impressed in his three starts, even though the Eagles are 1-2. Hurts did throw two interceptions and lost a fumble against the Cowboys, but he posted over 400 yards of total offense for the second week in a row. In three starts, Hurts has thrown for 847 yards, five touchdowns, and two interceptions, and he has run for 238 yards and a touchdown on 38 carries. He has completed only 54.9% of his passes (62 of 113) in that stretch, but he has moved the ball far more effectively than Wentz was.

First half over 22.5 (-110): In three games against quarterbacks who compare to Hurts in dual-threat ability, Arizona (Kyler Murray), Baltimore (Lamar Jackson), and Seattle (Russell Wilson), Washington was outscored 54-13 in the first half: 20-0 at Arizona, 21-10 vs. Baltimore, and 13-3 vs. Seattle. The Eagles should be able to move the ball early and put some points on the board.

With nothing to play for beyond getting to spoil Washington’s season, what kind of performance will Philadelphia put in? It is one more game for Hurts to audition to be the guy going forward, and if there is anyone who can neutralize Washington’s pass-rushing threats, a mobile quarterback can. Jackson, Murray, and Wilson each ran for more than 50 yards against Washington this season. All three picked up wins as well. Look for the Eagles to play the spoiler and send either the Cowboys or the Giants to the postseason.