Baltimore Ravens vs. Cincinnati Bengals Preview: Do the Playoffs Await for the Ravens? 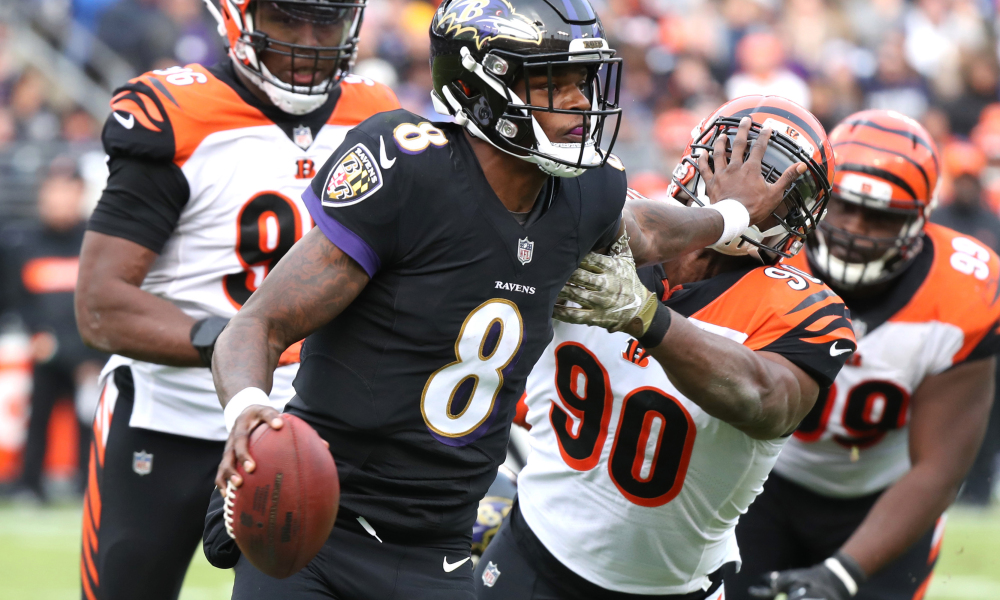 Last season, the Baltimore Ravens dominated the AFC on the way to a league-best 14-2 record, only to exit the playoffs at the hands of the Tennessee Titans in the divisional round. This season has been much more of a struggle for the Ravens, but heading into their final regular-season game, a chance at postseason redemption awaits them if they win at Cincinnati.

There are other scenarios that could see the Ravens clinch a playoff berth even if they lose, but the best way to ensure that they are one of the big winners in the five-way scramble between a 10-5 quintet Tennessee (in), Miami (in), Baltimore (in), Cleveland (in), and Indianapolis (out) is to beat the 4-10-1 Bengals in an AFC North showdown that kicks off at 1 pm ET Sunday on CBS. The Ravens are favored by a double-digit margin, while the total for the game is currently set at 44.5.

Six weeks into the season, it looked like the Ravens could be on their way to another terrific season. But after starting 5-1, they lost four of their next five games. At 6-5, their AFC North hopes were already done for, with Pittsburgh then sitting at 11-0, and their wild-card hopes were up in the air with a number of other teams also in the mix.

But the right Ravens have shown up at the right time, and they enter their finale with four wins in a row. An epic 47-42 Monday Night Football win at Cleveland in Week 14 is the most notable win in their current streak, with the other three wins coming at home against the Cowboys, Jaguars, and Giants. But they have looked more like their best selves, and so has 2019 MVP Lamar Jackson.

Defensively, the Ravens look more like themselves as well. In the last two games against the Jaguars and Giants, they allowed only 43 more yards total (536) across the two games than they did in the shootout at Cleveland (9/22).

This is a fifth straight losing season for the Bengals, but it is ending on a somewhat positive note. The Bengals lost potential first overall pick and potential Offensive Rookie of the Year Joe Burrow in Week 11, when Burrow had been one of the few bright spots of another lost season.

But after three straight losses without Burrow, the Bengals come into their season finale off the back of consecutive wins, which is something they have not achieved since Weeks 4 and 5 of the 2018 season when they started out 4-1 before finishing 6-10. In Week 15, they knocked off the Steelers 27-17 behind their strongest defensive effort of the season. Then last week at Houston, they produced their best offensive effort of the season in a 37-31 win over the Texans, posting a season-high in points and also a season-high 540 yards.

Quarterback Brandon Allen took over for Burrow and started three games before missing the win over the Steelers, which Ryan Finley started. Allen returned against the Texans and was 29 of 37 for 371 yards and two touchdowns. while running backs Samaje Perine and Gio Bernard combined for 160 yards and two touchdowns on 29 carries. Their output against the Texans, as bad as the Texans are defensive, is all the more notable given how they have performed offensively throughout this season. The Bengals are 28th in the NFL in yards per game (328.1), 23rd in passing yards per game (226.7), 25th in rushing yards per game (101.4), and 27th in points per game (20.5).

Defensively, there is nothing to write home about, but their effort against the Steelers shows that they are capable of performing well occasionally. Prior to the Texans amassing almost 500 yards last week, the Bengals had allowed less than 300 yards in back-to-back games–277 vs. Dallas in Week 14 and 244 vs. Pittsburgh in Week 15–for the first time since Weeks 14 and 15 of the 2018 season. That said, they did allow the Texans to run for 166 yards on only 17 attempts, which does not bode well for this week given how the Ravens have been running the ball in their win streak.

Baltimore team total over 28 (-110): The Ravens beat the Bengals 27-3 in Baltimore in Week 5. With how well they are playing right now and the defense that they are facing, 28+ points is well within their reach.

The Bengals come into this one having played well in their last couple of games, so the Ravens would be unwise to be complacent, given that they need to win to ensure that their talented squad will have a chance to make a championship run. It would not be a surprise to see Cincinnati keep this one close for at least a while, but the Ravens will not be denied. Double-digit spreads on the road are always a tricky thing, so stay away from it. But the over is a good option here, with the Ravens flourishing offensively and the Bengals coming in off of their best offensive display of the season.