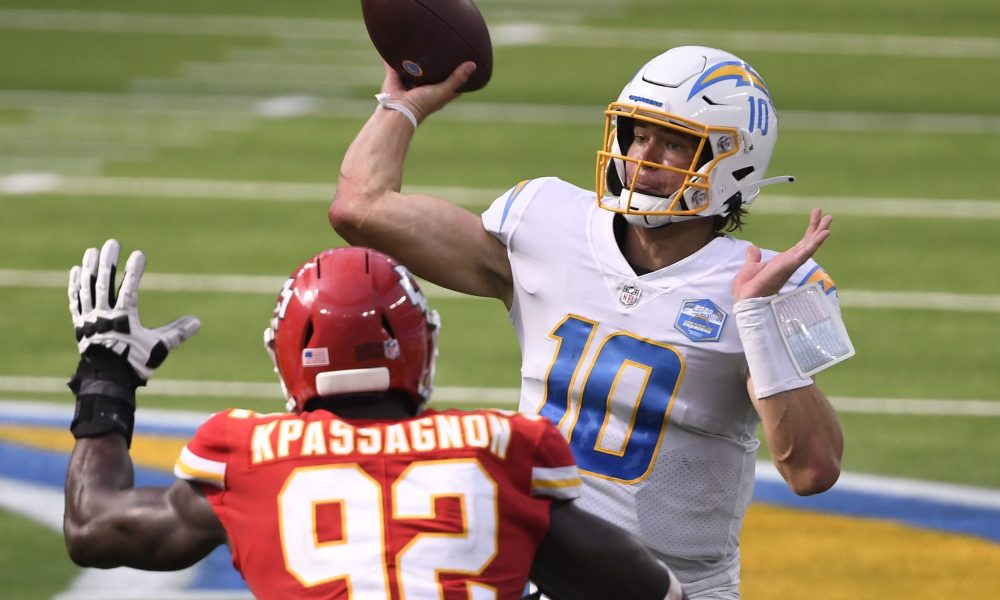 The red-hot Los Angeles Chargers (6-9) will close out their season on the road against AFC West champions Kanas City Chiefs (14-1) on Sunday. Kickoff is set for 4:25 p.m. at Arrowhead Stadium and will be televised on Fox.

Los Angeles enters this contest on a three-game winning streak after defeating the Denver Broncos 19-16 last week as Justin Herbert led the Chargers to another fourth-quarter game-winning drive. Herbert set an NFL rookie record for the most passing touchdowns (28) when he connected with Austin Ekeler in the second quarter for the Chargers’ only touchdown of the game.

Meanwhile, Kansas City extended its NFL-best winning streak to 10 straight with a 17-14 come-from-behind victory over Atlanta as Patrick Mahomes threw for 278 yards and two touchdowns, including the game-winner to Demarcus Robinson with less than two minutes left.

With Kansas City having already wrapped up the top seed for the AFC playoffs, FanDuel has listed them as a 5.5-point underdog with the money line set at +205. As the favorite, the Chargers are -250 on the money line. The over/under is 43.5 points.

Chargers Playing Their Best Football Of The Year

Los Angeles is on its first winning streak of the season, and the Chargers have won four of six games overall. The Chargers, who have a +5 turnover differential during its current three-game winning streak, have been inconsistent on offense of late. Overall, they rank 21st in points per game (23.1) and ninth in total yards (379.8)

Herbert has done a solid job directing the offense as he has produced 4,259 total yards, including 4,034 passing yards, along with 32 touchdowns. He also has thrown 10 interceptions and been sacked 29 times.

Austin Ekeler leads a rushing attack, which has struggled lately, topping the 100-yard mark just once in the past seven games, with 512 yards, and is third on the squad with 48 receptions for an additional 370 yards. Josh Kelly (354 rushing yards and two touchdowns), Kalen Ballage (254 rushing yards), and Justin Jackson (198 rushing yards) also get time in the backfield.

Having already clinched a first-round bye, it is believed that coach Andy Reid will rest some of his starters in this week’s game.

Mahomes, who has struggled the past two games, leads the NFL’s top-rated offense with a league-best 4,740 yards and 38 touchdown passes. The Chiefs averaged 30.1 points and 425.7 total yards a game. Veteran Chad Henne will be the signal-caller if Mahomes doesn’t play or pulled early from the contest.

With leading rusher Clyde Edwards-Helaire (ankle) expected to miss his second straight game, the running back duties will likely fall to Leveon Bell (308 rushing yards and two touchdowns) and Darrell Williams (169 yards and one score).

Travis Kelce, who set an NFL record for receiving yards by a tight end, leads a talented group of receivers with 1,416 yards and 11 touchdowns. Tyreek Hill has 87 receptions for 1,276 yards and 15 touchdowns. Mecole Hardman, Robinson, and Sammy Watkins are valuable members of the receiving corps.

Chargers To Close Out Season Strong

With Kansas City surprisingly struggling offensively against Atlanta and the status of several key starters currently unknown, I am going with the Chargers to finish the season with a “bang” and to not only win but cover. Herbert has worked his magic the last three games and played well in the first outing of the season against the Chiefs, whose defense has demonstrated some chinks in the armor as they have failed to get off the field after third downs. Also, go with the under.