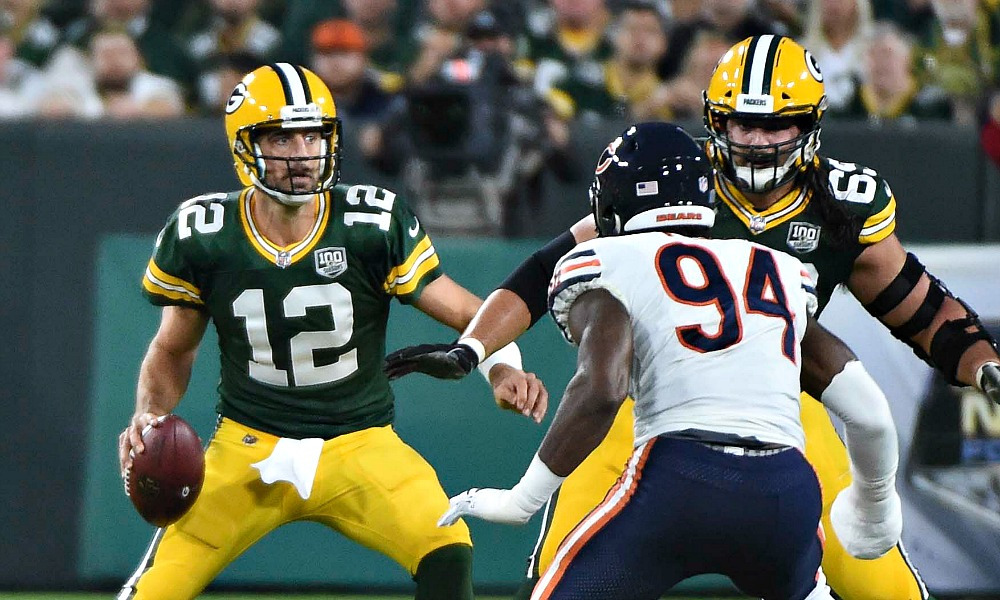 A few weeks ago, it looked like the Chicago Bears would be sitting at home in January, watching seven other NFC teams in the postseason. Now, the Bears are in a position to be one of those seven teams, but there is the small matter of beating Green Bay at home on Sunday. The NFC North rivals kick-off at 4:25 pm ET on FOX. The Packers are favored by 4.5 points, while the total for the game is set at 50.5.

The Bears (8-7) can still get into the playoffs if they lose if Arizona (8-7) also loses to the Los Angeles Rams, as they hold the tiebreaker over the Cardinals. However, a win would be even sweeter for Chicago, as it would not only secure their playoff spot but could also prevent the Packers (12-3) from clinching the top seed in the NFC.

Last season, the Packers finished 13-3 but were beaten out to the NFC’s top seed by San Francisco due to a head-to-head loss. That proved to be vital, as the 49ers hosted and won the NFC Championship matchup between them. This season, the Packers have 13-3 in their sights again, but this time it would net them the top seed ahead of New Orleans and Seattle.

Green Bay heads into Week 17 with five wins in a row since an overtime loss at Indianapolis in Week 11, in which they blew a two-touchdown lead in the second half. The Packers have not had too many bad performances this season or overall in Matt LaFleur’s two seasons as coach. A big part of that consistency is Aaron Rodgers’ continued excellence. Rodgers has already locked up his ninth 4,000 yard season, and he has thrown a career-high 44 touchdown passes, with only five interceptions in 502 attempts. He also is completing a career-best 70.3% of his passes, and if he can remain at 70% or better after Sunday, it will be the first time in his career that he has hit that mark.

One of the reasons why Rodgers has been so good is his offensive line, which has allowed him to be sacked only 19 times. However, that line suffered a devastating blow on Thursday, as Pro Bowl left tackle David Bakhtiari went down in practice with an apparent torn ACL. With Bakhtiari done for the season, versatile lineman Billy Turner, who started at left tackle when Bakhtiari was injured earlier this season, could be tasked with protecting Rodgers’ blind side again.

Offensively, the Packers are third in the NFL in yards per game (393.9), thanks to the ninth-ranked passing offense (257.9 ypg) and the eighth-ranked rushing offense (135.9 ypg). Most notably, they are also first in the league in fewest giveaways with only 10. Their improvement on the ground is a big part of why they are a serious championship contender, as they went from averaging 104.2 rushing yards per game in Mike McCarthy’s last season in 2018, to 112.2 yards per game last season, to now posting the best average of any season in the Aaron Rodgers era thus far. Their other Aaron, running back Aaron Jones, has followed up last season’s breakout campaign by going for 1,062 yards and eight touchdowns on an average of 5.6 yards per carry.

Defensively, the Packers are also one of the soundest units in the NFL. They have given up some points this year, but last time out, they held Tennessee, one of the league’s most potent offenses, to only 14 points and 260 yards in a 40-14 rout. Linebacker Za’Darius Smith is having another excellent season, with 50 tackles, 16.5 tackles for loss, and 12.5 sacks, while safety Darnell Savage leads the team with four interceptions. Green Bay held only two of their first 11 opponents under 20 points, but three of their last four opponents have been held to under 20 points. They have a modest 16 takeaways this season, but they did record three takeaways in a 41-25 win over Chicago in Week 12.

The Bears opened the season 5-1, giving hope that they could challenge the Packers for the NFC North. Then they entered into freefall, dropping six games in a row to fall below .500 heading into the home stretch. But they have woken up just in time to save their playoff hopes and potentially coach Matt Nagy’s job, with three wins in a row to move ahead of the Cardinals for the seventh seed in the NFC.

The defense was supposed to the big calling card this season, but it’s the offense that has led this late surge. In their win streak, the Bears are averaging 36.7 points and 399.3 yards per game. After being benched for Nick Foles earlier in the season, Mitchell Trubisky has found his groove since returning to the starting lineup in Week 12. In his last five starts, Trubisky has completed 68% of his passes for 1,243 yards and ten touchdowns, with four interceptions.

Chicago Bears team total over 23.5 (-110): The Bears have been productive offensively since Trubisky returned to the starting lineup in Week 12. Will continued offensive production be enough to get a vital win? Maybe, maybe not, but it will be enough to win this bet.

The Packers are by far the better team, but the Bears have been playing well at the right time and are at home for their biggest game of the season. That said, the Packers come off of one of their best wins of the season, as they routed one of the AFC’s best teams, and they will not be content with just the NFC North title. Not only is this a game against their fiercest rival, but the memory of missing out on the #1 seed last year and thus having to play the NFC Championship game on the road instead of at Lambeau Field should act as fuel for a strong performance. Even a loss might not keep the Bears out of the postseason, with Arizona facing one of the NFL’s best defenses on the road. The spread is too tricky to take a side here, but look for the over to cash.