Bears and Packers Open 2019 NFL Season; What Did We See? 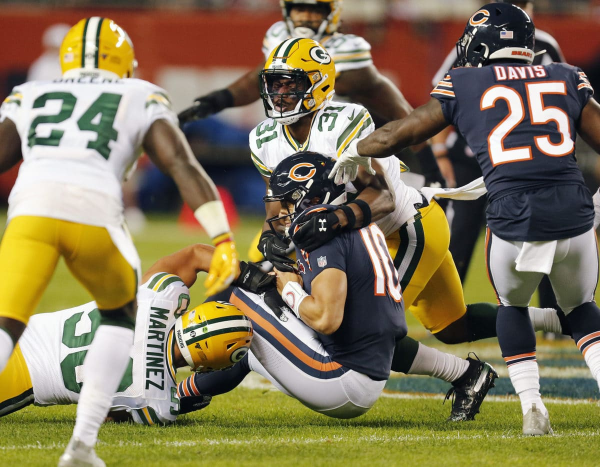 The NFL season kicked off Thursday night in Chicago, where the defending NFC North champion Chicago Bears played host to the visiting Green Bay Packers. While we came for a potential fireworks show from the likes of Aaron Rodgers, we stayed for the old-school Bears-Packers fistfight dominated by defense.

In the end, a second-quarter touchdown pass from Rodgers to Packers tight end Jimmy Graham was the difference as Green Bay defeated Chicago by a score of 10-3.

Rather than an offensive showcase, both defenses displayed top-10 potential and felt suffocating at times throughout the game. With five sacks for both teams, neither offense managed to find a rhythm.

The defenses appeared miles ahead of the offenses in this contest, and that was best exemplified by the fact that the Bears attack, led by quarterback Mitchell Trubisky, faced a 3rd-and-40 at one point in the game. They ended up punting on that drive.

Thursday night was an ugly affair filled with 10 penalties for each team, dropped passes, mistakes, and incompletions. On the back of just 467 yards of total offense, the 13 points scored between both clubs wouldn’t even be enough top the 2018 Cardinals and their last-place 14.1 points a game.

So, the Packers escape Soldier Field with the win and hand the Bears an 0-1 record, but how do we feel about these teams going forward?

First, Rodgers and this Packers offense will need some time to get used to a new scheme under first-year head coach Matt LeFleur. Second, with a defense that looks poised to give any offense problems, Rodgers may not have to do it all himself.

Apart from the Graham touchdown and a 47-yard completion to Marquez Valdes-Scantling, Rodgers never really looked dangerous. He finished 18 for 30 with just 203 yards and the lone TD while enduring five sacks and non-stop pressure.

Perhaps the most incriminating stats from the game were the Packers’ -12 yards of offense in the first quarter and their 2-for-12 tally on third-down conversions.

However, the defense stepped up. With five sacks of their own, the Packers never allowed Trubisky to get comfortable. With an interception in the end zone by safety Adrian Amos and a game-ending sack to close things out, the defense certainly won this one for Green Bay.

The Packers didn’t look like a team with 19/1 odds, behind only the Eagles, Rams, and Saints in the NFC. However, this defense will keep Green Bay in just about every game, allowing the new offense to get rolling behind one of the most talented QBs in NFL history.

Head coach Matt Nagy felt like a godsend for Trubisky last year. In 2018, the Bears quarterback took a huge leap forward from his rookie campaign and ended the year with 3,223 yards, 24 TDs, and 12 interceptions while completing 66.6 percent of his passes.

In the first game of 2019, Trubisky regressed. With 228 yards through the air and one pick with no touchdowns, it’s no wonder Chicago failed to get the ball in the end zone.

The most frustrating part of Trubisky’s performance was the late-game interception the quarterback tossed as the Bears were driving with just under two minutes to play. After an impressive 13-play, 59-yard drive, it felt like Trubisky lobbed the ball up in desperation on 3rd-and-10 when the Bears were in four-down territory.

However, the Chicago defense looked like a unit prepared to replicate their dominant performance from a season ago. In 2018, the Bears were the third-ranked defense with just 299.7 yards allowed per game and first with an average of just 80 rushing yards allowed.

Well, Green Bay was only able to rush for 47 yards and throw for 203, so Chicago is right back on track.

The Bears came into this contest with 19/1 Super Bowl odds of their own, level with Green Bay. Chicago might have a proven defense, but they’ll need much more than three points a game out of Trubisky and the offense if they have a shot at the playoffs.

If the Bears don’t improve on offense quickly, this team could run out of time in a division that includes Green Bay and Minnesota.