Arians Shuts Down Idea Of Brown To Bucs Amid Speculation 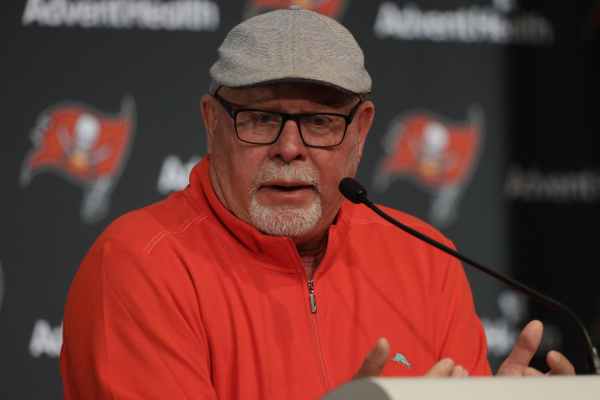 After the blockbuster signing of Tom Brady to the Tampa Bay Buccaneers, it didn’t take long for rumors to begin swirling about the idea that the former New England Patriots QB wanted Tampa Bay to bring in wide receiver Antonio Brown. Head coach Bruce Arians says that won’t happen.

On the “Tiki and Tierney” show, hosted by Tiki Barber and Brandon Tierney, Arians was asked whether or not Brown to the Bucs was a possibility. “Yeah, it’s not gonna happen,” Arians said. “There’s no room. And probably not enough money. But it’s not gonna happen. It’s not a fit here.”

When pressed on whether or not the main obstacle was a lack of trust between Arians and Brown, who worked together in Pittsburgh, Arians said, “Yeah, I just know him, and it’s not a fit in our locker room.”

After Brown’s wild training camp and subsequent release from the Raiders last season, the Patriots brought Brown in to play alongside Brady. After one game with New England, in which he caught four passes for 56 yards and a TD, Brown was released.

Despite speculation that Brady would like the Bucs to get Brown on the roster, that likelihood now looks very small.

Apart from his off-field issues, there’s no denying that Brown was one of the best receivers in football for much of his time with the Steelers. Yet Tampa Bay is one of the few places in the NFL in which the talents of Brown may not be a distinct upgrade.

For all of the Bucs’ faults in 2019, providing quarterback Jameis Winston with receiving threats was among the franchise’s greatest accomplishments. Winston was able to throw for 5,109 yards and 33 touchdowns in large part because he had two Pro Bowlers on the outside.

Chris Godwin led the team in receiving with 86 catches, 1,333 yards, and nine touchdowns. Mike Evans added another 67 catches for 1,157 yards and eight TDs.

And while Tampa Bay’s third-leading receiver, Breshad Perriman, is a free-agency departure, the team will still have O.J. Howard at tight end. Howard experienced a mediocre 2019 season but was a touchdown threat in 2017 (six) and 2018 (five).

We’ll now get to see if Brady can utilize those weapons to raise the Bucs’ record from 7-9 in 2019 to a playoff-worthy one in 2020. Many expect him to do just that based on the fact that Winston recorded 30 interceptions a season ago.

By replacing Winston with Brady under center, the Buccaneers instantly became a championship threat in the eyes of Vegas. However, they’re not a favorite just yet.

Tampa Bay’s main obstacle on the road to the Super Bowl is the fact that one of the four teams ahead of them on the list of favorites, New Orleans, is an NFC South rival.

However, the addition of another playoff spot in each conference gives the Bucs a better chance of reaching the postseason as a Wild Card. And once Tampa Bay is in the playoffs, Brady’s experience and proficiency in single-elimination play could carry this team a long way.

In 41 postseason games, Brady is 30-11 with 73 touchdowns and 35 picks. The 42-year-old took home nine AFC Championship titles and six Super Bowl titles in his 20 seasons with New England.

Now, the Buccaneers are hoping to extend the future Hall-of-Famer’s legacy with another Lombardi Trophy.