49ers the Smart Bet Against Cowboys 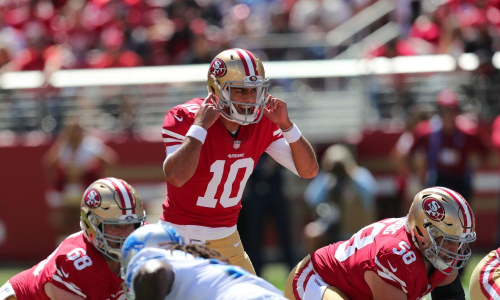 The Cowboys and 49ers are not where they expected to be entering the 2020 season. Both have been hit with devastating injuries that effectively made the season a lost one after once thinking they’d be able to contend. The 9ers are 3 point favorites in this game while the Over Under is 45.5.

Odds for Cowboys vs 49ers

There are a number of key players out for both teams. First is the most obvious, as both teams remain without their original starting quarterbacks entering the season. Dak Prescott’s season-ending injury has Andy Dalton under center for Dallas once again, while Jimmy Garoppolo’s absence means another start for Nick Mullens.

The 49ers will also be without stud tight end George Kittle once again. Raheem Mostert is Probable, but wideout Deebo Samuel will not be playing. Defensively, Fred Warner is Questionable while players out for the season already include Nick Bosa, Solomon Thomas, and Dee Ford.

The Cowboys have cornerback Anthony Brown listed as Questionable, while Ezekiel Elliot is Probable. Players out for the year already include Blake Jarwin, Zack Martin, La’el Collins, and Tyron Smith.

Both teams are among the worst in the league at taking care of the football. The 49ers 25 turnovers on the season rank second highest in the league, one spot ahead of the Cowboys who have turned it over 24 times. This makes for what is expected to be an ugly game that could be decided by ball security.

Betting the 49ers to Cover

In what looks to be one of the uglier games of the week, there’s great value in betting on it. It appears the public has found that value so far, as 64% of bets are coming in on the 49ers.

The main reason to feel confident is supported by the red zone scoring statistic. The 49ers are the better-coached team at this point in time. Not only that, they are deeper into their coaches’ tenure and have more players he has designed his scheme around.

The return of Mostert at running back is a big reason to expect the 9ers offense to be productive. He’s averaging five yards per carry this season but has been limited to 90 carries. The 9ers have also proven capable of beating good teams, while the Cowboys have not. Simply put, San Fransisco is both the better team and the better-coached team. For that reason, take them -3 before the line moves a bit in the wrong direction.

Nick Mullens Over-Under on yards is at 237.5. Although his team is going to win the game, it should be all about them tearing up the Cowboys on the ground. Take Mullens under if you like making side prop bets to make games more enjoyable.