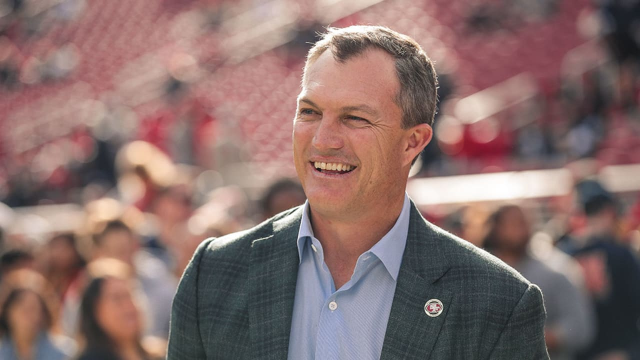 The San Francisco 49ers had a 10-point lead with six and a half minutes to go in last season’s Super Bowl, only to see it slip away in the remaining time left on the clock. Now, after a few offseason departures, it’s time to rebuild the roster and get themselves in a position to stay atop the NFC.

In an interview with ESPN on Monday afternoon, general manager John Lynch hinted that the 49ers are open to trading either one of their first-round picks – the 13th overall and/or the 31st overall.

As it currently plays out for the 49ers, they have a huge gap between their 31st overall pick to the 156th overall pick, which is midway through the fifth round.

“I’m comfortable saying that there’s scenarios where we are going to be open both of those picks to moving back,” said Lynch. “It’s out there for everyone to see. We have two firsts, and then we don’t have a pick until the fifth, where we have two picks, and then a sixth and two sevenths.

“So with those picks, there’s a big gap in there, so maybe you don’t want 10 (picks), but a couple more might be nice just to close that gap.”

Even if the trade offers are piling up, the 49ers could very well use that 13th overall pick if the right player is available for the taking.

“There also are scenarios where we’re going to be real convicted with a player at 13, and we have that in our mind,” said Lynch. “Who are those players? I think the way you have to look at it is we lost a special player in Buck, a foundational-type player.”

Lynch would continue: “So if you can find a foundational player at 13 that’s something you have to weigh. Can you find two more foundational players later on? I don’t think you can pass up on a guy that you think is a difference-maker at those spots.

“Even at 13, which is a relatively early pick, there’s so much that can go on, so we’re prepared for all scenarios, open to listening, but we’re also prepared that if we’re convicted at those spots, we’ll stand pat and deliver the pick.”

Given the new world that we live in under these coronavirus restrictions, all NFL teams are being mandated to conduct their drafts separately in their own homes via teleconference calls and video. This will put a damper on picking the right players this year, not having the in-person interviews that all teams are accustomed to.

“We have kept in good contact with Joe,” Lynch said. “He’s doing his typical routine down with his family in San Diego, working out. We’re encouraged. We’ve heard nothing that would lead us to believe that Joe’s not going to play, so we are encouraged with that.”

As for the rest of the 49ers roster, there are still players like EDGE Dee Ford, LB Kwon Alexander, WR Marquise Goodwin and S Jaquiski Tartt that have been rumored in trade discussions. Lynch did confirm, though, that Goodwin was the only one being actively shopped.

“The one thing I feel comfortable saying is the one guy where there’s actively been discussions going on right now is Marquise (Goodwin),” said Lynch. “That’s something we have been clear on.”