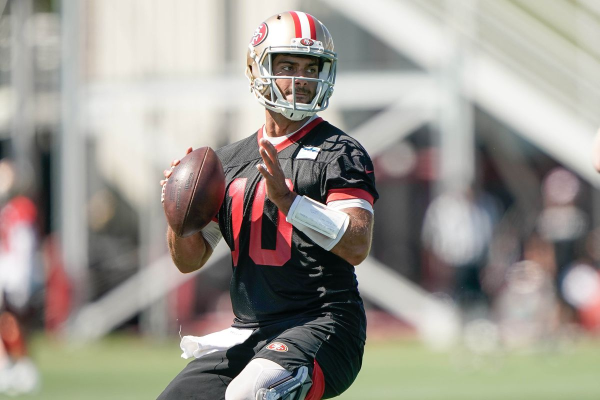 The San Francisco 49ers came into the 2018 season with a lot of optimism, but an injury to quarterback Jimmy Garoppolo quickly derailed things. The 49ers have been in a long and slow rebuild, but it looks as if they are starting to turn the corner a little bit. San Francisco has a lot of things to fix if they want to be a playoff contender, but this team doesn’t feel like it is too far away from being a playoff contender.

San Francisco finished the 2018 regular season with a record of 4-12, and they weren’t very competitive in a lot of their losses. The 49ers also finished the season by going just 1-4 against the spread in their last five games. San Francisco dealt with a ton of injuries a season ago, and a healthy roster could make a huge jump this season.

Key Moves in Offseason: Re-signing kicker Robbie Gould to a four-year, $19 million contract extension was one of the biggest moves the 49ers made in the offseason. Left tackle Joe Staley also agreed to a contract extension and should be a stabilizing force on the offensive line.

Jimmy Garoppolo: Even though Jimmy Garoppolo has played just a handful of games in a Niners uniform, he is the most important player on this roster. Garoppolo is 6-2 as a starter for the 49ers and has thrown 12 touchdowns to eight interceptions in San Francisco. The 49ers ranked 15th in the NFL in passing a season ago but should be much better this season.

Matt Breida: Breida came out of nowhere to take over the starting job in the backfield for the 49ers and looks to be set for a big season. Breida ran for 814 yards on 153 carries a season ago and should get the ball a ton in this offense.

Nick Bosa, Deebo Samuel, Jalen Hurd: The top three draft picks by the 49ers should all see the field early on in the 2019 season. Nick Bosa was selected with the second overall draft pick after a standout career at Ohio State. San Francisco went with a pair of receivers, Deebo Samuel and Jalen Hurd, in rounds two and three. Samuel and Hurd should give Garoppolo some talented targets to throw the ball to.

Below is a quick look at some of the prop bets available for the 2019 San Francisco 49ers team. All of these odds could change as we get closer to the regular season.

Even though the 49ers should be much improved in 2019, they are still going to fall short of making the playoffs. San Francisco was dealt a pretty difficult schedule despite going just 4-12 a season ago, and they probably have at least three losses in their own division. The 49ers will finish the 2019 season with a 7-9 record, and so betting the UNDER 8 wins would be the smart play, even though it doesn’t have the best odds. Betting the 49ers to win the NFC West isn’t a smart bet either, as the Los Angeles Rams are one of the top teams in the NFL and should be division champs again.