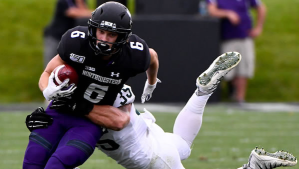 On November 21, the Wisconsin Badgers (2-0) would visit the Northwestern Wildcats (4-0) in a critical game in the Big Ten’s West Division, scheduled to kickoff at 3:30 PM.

These teams are two of the best teams in the Big Ten Conference, and at the beginning of the year, the tenth-ranking Badgers had won straight games and placed eighth in the nation in rushing at 261.5 yards per outing. Wisconsin established a 28-point halftime lead on Saturday and sailed for a 49-11 road win over Michigan. In their last 4 league plays, the Badgers are 4-0 ATS, and their previous 24 road games are 17-7 ATS. In their immediate previous 5 games overall, the Wildcats are 4-0-1 ATS, but in their previous 11 home games, they are only 2-8-1 ATS.

The Wisconsin Badgers to Take the Game to the Wildcats

After beating the Michigan Wolverines, 49-11, last Saturday, the 13th ranked Wisconsin Badgers improved to 2-0. Wisconsin had no trouble piling up points against the Wolverines on the road and comfortably cruised to victory with a 28-0 advantage after heading into halftime. By a 468-219 margin, Wisconsin out-gained Michigan and dominated the turnover battle in the win by a 2-0 margin. The RB duo Jalen Berger and Nakia Watson, which combined for 152 yards & 3 TDs on 27 carries, led the way for the Badgers.

Graham Mertz, the Wisconsin Badgers freshman quarterback, has been on fire, with seven touchdowns, no interceptions, and a 74.4 percent in completed passes.

The Badgers run defense is a tight rack, with only Nebraska getting past 77 yards in all four games played. The Wisconsin Badgers are known for their ability to control the clock with great drives.

Are the Northwestern Wildcats up to the Task?

After beating the Purdue Boilermakers by 27-20, this past Saturday, the 23rd-ranking Northwestern Wildcats advanced to 4-0 in the season. After a 42-yard FG by Charlie Kuhbander gave the Wildcats a 27-13 advantage early in the 4th quarter, Northwestern was outgained defensively against the Purdue offensive attack and was able to pull away. By a 292-265 margin, Northwestern outgained Purdue and forced one turnover in the win. WR Ramaud Chiaokhiao-Bowman, who had 8 catches for 86 yards & 3 TDs, led the way for the Wildcats.

With a total of 86 yards on 8 catches, Ramaud Chiaokhiao-Bowman led the team in receiving yard. In this game, he received an average of 10.8 yards per catch. By way of throwing, Peyton Ramsey went 23/36 for 212 yards and completed 3 touchdowns.

The Wildcats are 66th in college football, averaging 28.0 PPG in terms of their ability to score points. The Wildcats have so far compiled 723 yards through the air during this campaign, as well as keeping an average of 180.8 passing yards per game, which has them sitting at 102nd position. They carry an average of 174.0 yards per game and have rushed for a total of 696 yards. The Northwestern Wildcats have a total of 354.8 yards per game, which places them at 96th in the league.

A total of 367 passing yards (91.8 yards per contest) and 2 touchdowns on the field for the campaign were surrendered to Northwestern. The Wildcats have allowed on an average 14.0 points per game, which has them sitting at 20th in the league. They have given up 56 total points this season, surrendered 3 air touchdowns as well as 210.0 yards/game.

In this series, Wisconsin holds an all-time 60-36-5 record, and the two teams have divided the previous two meetings. Against the Badgers, the Wildcats will have rough time scoring points. The stronger play is to be covered by the favorite.