Why the Sooners will win the Big 12 Championship 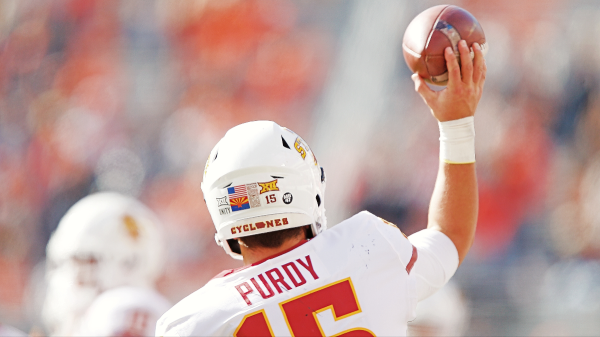 On Saturday the #8 Iowa State Cyclones take on the #12 Oklahoma Sooners in the Big 12 Championship game. These teams met in Week 3 in early October with the Cyclones emerging victorious in a close 37-30 game.

Oklahoma enters as the 7th ranked scoring offense, putting up 43 points a game. QB Spencer Rattler ranks 13th in passing yards, and 8th in touchdowns with 24. The Sooners play fast, and score often, although that wasn’t the case in their last game against Baylor. The Bears held Oklahoma to just 27 points and only surrendered 269 total yards. It was the first game all season where Oklahoma failed to put up at least 400 yards of total offense. Lincoln Reilly’s squad only ran 59 total plays, which is 13 less than their season average. Star WR Marvin Mims was hurt on his first catch and is still listed as questionable for Saturday’s game.

Iowa State can light up the scoreboard as well. The Cyclones enter as the 29th ranked scoring offense averaging 34 points per game. While the Sooners get their work done through the air, Cyclone RB Breece Hall is the focal point for the Iowa State offense. Hall has rushed for 1357 yards, averaging 6.1 yards per carry, and an astonishing 17 touchdowns. He ranks 5th in rush yards per game, 4th in rush touchdowns, and 5th in attempts per game. Hall’s success opens up deep shots for WR Xavier Hutchinson (50 receptions, 612 yards, 4 touchdowns) and limits the pressure on QB Brock Purdy (196-296, 2272 yards, 17 touchdowns).

In their last game against West Virginia, the balanced Cyclone attack was on full display. Iowa State trounced the Mountaineers 42-6, outgained WVU 483-263, and held West Virginia to just 54 rushing yards. The Cyclones ran for 236 yards and threw for 247, demonstrating their ability to beat teams in either fashion. Hall went for 97 yards on 22 carries and added a score. Purdy threw just 3 incompletions going 20-23, for 247 yards and 3 touchdowns. If the Cyclones are able to be successful through the air and ground, the Sooners could be in for a long afternoon.

Surprisingly the Sooners have the 4th ranked rush defense in the NCAA. In their last three games, they’ve held teams to an average of 66 rushing yards per game and just 2 yards per carry. Their pass defense is a little suspect, however, ranking 66th in the country. It’ll be interesting to see how the Cyclones attack the stout Sooner rush defense. In their matchup in early October, Hall rushed for 145 yards on 28 carries and 2 touchdowns. He averaged over 5 yards per carry, and Purdy did just enough to help the Cyclones get the W.

Fanduel currently lists Oklahoma (-5.5) as the favorite with the total set at 58.5. The absence of Marvin Mims would be devastating to the Sooners Offense so you’ll want to keep an eye on that as the game approaches. I’m leaning Oklahoma here, as I think it’s a big ask to beat this team twice. They’ve really started to click on both sides of the ball and have ripped off six straight wins, with only one of those games being close. Their October matchup came down to the last drive, so I do expect this one to be close, but give me the Sooners -5.5.