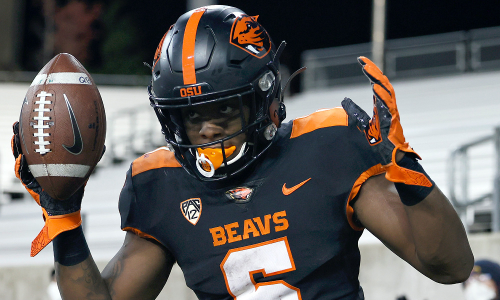 With not having played any games this season, the Washington Huskies look to open their season on a high note against their Pac-12 North foe, the 0-1 Oregon State Beavers. The game is set for 10 p.m. on Saturday 11/14.

This matchup features two teams who are no stranger to each other. Since their first game in 1897, these two teams have clashed 104 times with the Huskies having the more favorable record at 66-34-4.

In their season opener, Oregon State fell to Washington State 38-28 but showed promise. Junior QB Tristian Gebbia was able to throw for 329 yards through the air, completing 34 of his 48 attempts, finding the endzone once. Although these numbers are impressive as is, what really made the QB standout was his ability to find 8 separate receivers, 6 of them having 3 completions or more.

The Huskies are looking to pick up their 2020 season the way they finished their last campaign. The team finished last season with a bowl game victory in which they smothered Boise State in the Las Vegas Bowl. Washington finished last season 8-5 with a 4-5 in conference record. However, the teams defense was immaculate having allowed an average of 19.4 PPG which was good for 15th in all of college football.

Although Oregon State doesn’t have much to show for this season ATS, in their one game thus far, the Beavers did not cover. Against WSU last week, they were the -3 point favorite and eventually lost the game by 10.

Of course, this is Washington’s first game of the season but last year they beat the Beavers 19-7 and did not cover the spread.

Why Washington Will Cover: The Huskies are going to come out firing on all cylinders just as they did last season. But this season, things are a little different. Nobody knows anything about the offense. There are so many unanswered questions that everyone wants to know, however I think this will play to their benefit.

With everyone trying to decipher which of their four quarterbacks are going to be starting or coming into the game next, they will be pounding the defense. With newly brought in offensive coordinator John Donovan bringing in experience from the NFL, there is nothing this offense won’t be able to do. With ground power from Richard Newton and Sean McGrew and Terrell Bynum through the air, this team will be capable of great things.

These two teams are familiar with each other to say the least. Having played each other 104 times means that you know a lot about the other team and how they tend to operate. But, with new coaches, players, and systems coming and going it’s safe to say that things are always changing. In this case, it’s what Washington will look like.

Last week the CFB world got to see how the Beavers will look this season and it was not too shabby. RB Jermar Jefferson looked like a man on a mission with the way he was playing, making him their biggest offensive threat. The junior posted 21 caries for 120 yards, finding the endzone 3 times in his season debut. He also caught 5 passes for 50 yards making him the 4th leading receiver on the team.

Although Washington is a strong favorite team to win, there is no monetary value in backing them this week, unless you take them as a part of a parlay, there is no value in betting on the team.

Last season the Huskies averaged 32 PPG against their opponents while holding them to a measly 19.4 PPG. On the other sideline, the Beavers averaged a close 31.2 PPG but allowed a much worse 32.5 PPG to their opponents.

This calls for this game to be an offensive shootout. Or at least it should be… in their last 8 meetings the average game score has been 55 combines points . Hopefully this will be no different.