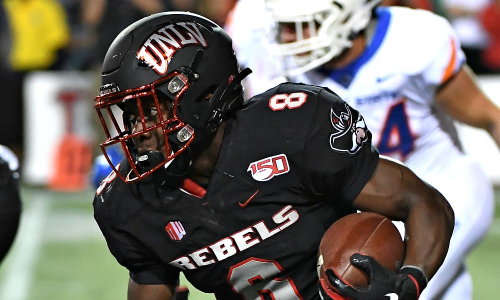 Saturday night caps off with two struggling Mountain West teams with 0-5 UNLV at 3-4 Hawaii from Aloha Stadium in Honolulu. Kickoff is 11 pm ET.

The season has been a struggle for what is usually at least an efficient Hawaii offense. The Rainbow Warriors have been outgained in each of their last four games including a 473-339 yard disparity against San Jose State in a 35-24 loss at home last week. Hawaii is 1-3 in its last four games.

UNLV coach Marcus Arroyo has been shuffling signal callers down the stretch as his team searches for its first win. If quarterback Max Gilliam finishes out the season as the guy he’d be the first UNLV QB to start every game since Jon Denton in 1996. It’s far from a sure thing for a team already toying with its freshman quarterback Doug Brumfield. Five players have thrown passes for the Rebels this season.

Odds for UNLV vs Hawaii

Hawaii hasn’t been great defensively, but it has been one of the better teams in the Mountain West against the pass. It’s allowing 182.9 passing yards per game, second best in the league. Its 8 interceptions is tied for the league’s best with San Diego State.

The success of the secondary is in part bolstered by the addition of Division-II transfer Quentin Frazier. He’s been in on 4 of the team’s 11 takeaways, including 2 picks and 2 fumble recoveries.

UNLV’s defense has had next to nothing to lean on this season. The Rebels have allowed more than 400 yards in each game this season and allow 472.6 yards per game. They are the worst against the run, giving up more than 250 per, and allow 7.3 yards per play.

Hawaii coach Todd Graham has continued to find more ways to get the ball in senior running back Calvin Turner’s hands this season. Turner has shared the backfield with Miles Reed throughout the season but has been a standout in the passing game. Turner has 597 all-purpose yards, highlighted by a 116-yard receiving performance against San Jose State. He’s also averaging a team-high 5.1 yards per carry. Between him, Reed and quarterback Chevan Cordeiro, expect Hawaii to exploit a weak UNLV run defense.

To say the last week has been interesting for UNLV’s QB Max Gilliam may be an understatement. It started with being sacked 3 times and throwing an interception in a 45-14 pummeling by Wyoming. Then Gilliam made headlines with an appearance on a reality TV show. Drama aside, the season has been a slog for the senior. He’s only thrown 4 touchdowns to 3 interceptions and averages just 5 yards per attempt. He hasn’t gotten a ton of help from his feature back Charles Williams, or his receivers, but Gilliam finishing the season under center is definitely in question.

Neither team has shown us a lot to feel great about this season, but Hawaii at least has an identity and a handful of weapons. While UNLV tries to evaluate its roster, the Rainbow Warriors will take care of business. However, two of Hawaii’s three wins this season are by a combined 6 points so I’m hesitant to give almost three scores. If the line fell to around closer to 14.5 I would jump on it. The total is in the right range so I’m taking the over here.

After extending their hot and San Diego’s cold streak, the Seattle Mariners will be looking to leave Petco Park with a two-game sweep as they take on the Padres this afternoon. Yesterday, the Mariners pounded out a dozen hits and plated eight runs, and Chris Flexen pitched 6.2 shutout innings to collect his third straight END_OF_DOCUMENT_TOKEN_TO_BE_REPLACED