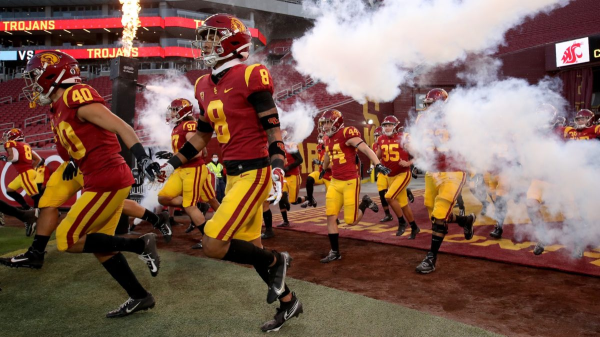 The USC Trojans and the UCLA Bruins face off at the Rose Bowl on December 12th. At stake on Saturday are the city bragging rights, the Victory Bell crown, and a South Division representative place in the Pac-12 title game.

The Trojans head into Saturday’s famous crosstown rivalry matchup on the back of an impressive 4-0 run, having snuck up wins against Arizona State (28-27), Arizona Wildcats (34-30), Utah Utes (33-17), and the Washington Cougars (33-17). The Bruins are also on a similar winning run of their won, albeit shorter. They have won their last two and are heading to the Rose Bowl with a 3-2 record.

In the 90th version of this ever-exciting crosstown matchup, there is a lot at stake. The Trojans won it last year, 52-35 at the Coliseum, and have won it more times overall, 48 to 32. Will the Bruins show up and ruin the Trojan’s party? We take a look at the UCLA Bruins Vs USC Trojans betting lines, analysis, and best picks.

The USC Trojans are favorites to win this one and are held at -172 on the moneyline to win outright by FanDuel sportsbook respectively. The Bruins, on the other hand, are held at +140 to win by the two leading sportsbooks.

The totals for the over/under line have been set at 63.5 points by the Fanduel sportsbook. FanDuel is holding the over at -110 and the under at -110.

The spread for the USC vs UCLA game is set at +/-3.5 by FanDuel sportsbook.

The Trojans: All to fight for

The Trojans come into their last regular-season game in imperious form and on the back of a 38-13 drubbing of the Washington State Cougars. They are also on a good winning run, 4-0 for the season, and will fancy improving their record against their crosstown rivals the Bruins.

In their last time on the grass, the Trojans had their QB Kedon Slovis complete 25 of his 32 passes without giving out an interception for 287 yards and 5 touchdowns. Wide receiver, Amon-Ra St. Brown was impressive too, and his 65 yards and 4 touchdowns on 7 receptions made the Trojans run away with it at the end.

Their rushing game was, however, far from satisfactory as they only managed to rush for 5 yards in their 20 carries in the game. 3.6 yards of carry and 112 running yards per game for a 4-0 team is not typical, and I will be curious about whether they will keep up winning with this approach.

They are also giving up 4.6 yards of carry per game, meaning that every time they have a running play, they lose a yard. The Trojans have also had dwindling offensive production from a yardage standpoint all season long. In their opener, they covered 556 yards, but this number stands at 287 in their last game.

Will, their over-reliance on their passing game, prove disastrous against the Bruins, or will they focus on their strengths and eke out a much-needed win on Saturday?

The Bruins have a point to prove

The Bruins go into Saturday’s matchup as marginal underdogs. They, however, head to the Rose Bowl on the back of an impressive 2-0 run in their last two games. They saw of Arizona State 25-18 and Arizona Wildcats 27-10 last, and apart from two close losses against the Colorado Buffaloes and the Oregon Ducks, they have been impressive on the grass.

Saturday’s match provides the Bruins with an opportunity to reclaim the Victory Bell trophy after losing it in 2019. They can also hurt their crosstown rivals as a win in this division tie-breaker will make the Colorado Buffaloes the division winners.

In their last game, a win over Arizona State Sun Devils, their QB Dorian Thompson-Robinson completed 18 of his 24 passes for 192 yards while scoring a rushing touchdown himself. The ground attack was led by Brittain Brown who carried 7 times for 94 yards with Delon Hurt, the junior wide receiver anchoring the air game by receiving 4 passes for a score and 62 yards.

The Bruins two season losses have come against ranked opponents, and they have been by less than 6 points in each. They have also put some good performances in their last three, including a solid losing performance against Oregon. With the Bruins healthy and adapting to coach Chip Kelly’s process, they will be tough to beat on Saturday.

I fancy a UCLA win in this one.

Despite the Trojans 4-0 record, they have produced less offensively in every single game this season. They started with 556 offensive yards in the opener against Arizona State. Last time out, they posted only 287 yards against Washington State. In the two home games so far, the Bruins have outscored their opposition 61-20 and look solid going into Saturday’s game. I think the wrong team is favored here as it is very rare to get a home underdog, with this big of a rushing differential. I like UCLA; I think they will win this game outright.