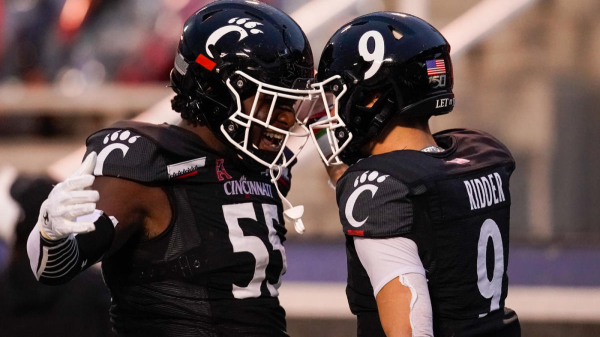 Saturday, Dec 19, sees the Cincinnati Bearcats (8-0) welcome the Tulsa Golden Hurricanes (6-1) to the Nippert Stadium for the 2020 American Athletic Football Championship game that tips of at 8 PM. ET.

The No.9 Cincinnati and the No.23 Tulsa 6-0 conference play record was the best in the AAC, guaranteeing Tulsa a debut championship game while having Cincinnati return after last year’s failure.

The game comes on the backdrop of a playoff ranking outrage that saw Cincinnati dropped by the selection committee to 9th despite not playing last Saturday. Will this playoff chatter deny the impressive Bearcats a championship?

Cincinnati is the real deal

Cincinnati played in a championship game last year, and they lost 24-29 to the Memphis Tigers. However, they have been brilliant during this period, but have just been unlucky. Since 2018, their win-loss record is 30-5, and they are ranked top 5 in the nation based on winning percentage.

Cincinnati’s offense has not been the flashiest, but it is getting the job done. Their efficient and balanced offensive plays, both in passing and rushing, make them difficult to beat.

Cincinnati rushes the ball in 57% of their plays, and their ground game is led by Gerrid Doaks, whose 137 rushing attempts have yielded 660 yards. Surprisingly, their QB Desmond Ridder is a significant contributor to their rushing game, with 6.7 rushing attempts per game resulting in 11 touchdowns, a college basketball best for a quarterback this season.

His impressive passing game emphasizes Ridder’s dual-threat ability. A healthy Ridder connects 66.5% of his throws for an 8.5 yards per attempt average, with his plays proving to be an anchor to the Bearcats offense. Tulsa’s chances are linked to how well they outhustle Ridder. If Tulsa does not find a way of stopping Rider, he will run the show and guide the Bearcats to a much-needed championship win.

Tulsa defense will be key

Tulsa comes into Saturday’s game on the back of a six-game winning streak, with their latest being a 19-6 defeat of the Navy Midshipmen. Their only loss this season was against the No. 21 Oklahoma State Cowboys 7-16 in their season opener, and they are currently sitting pretty at No. 23 in the latest rankings.

The Golden Hurricanes have been propelled into Saturday’s title game by their resolute defense. The Phillip Montgomery coached Tulsa is second in the AAC behind Cincinnati in both scoring and total defense. They are second in explosive plays allowed, are in the top ten in yards allowed (4.2), and are third-down stops leaders in the AAC.

Central to this fine defensive form in linebacker Zaven Collins who’s off chart instincts, size, and range is unmatched. Collins has made 51 tackles for the season, completed four sacks, intercepted four passes, forced a fumble, and made two interception return touchdowns. Collins has been tremendous for Tulsa, and his power-play will be critical if the Golden Hurricanes are to keep Saturday’s game close.

Where Tulsa has struggled is in their offense. They are scoring 27.7 points per game, have an 80th ranked success rate, and are just covering 411.1 combined yards per game.

Zach Smith, their senior quarterback, is completing 57.8% of his passes for 11 touchdowns and 1434 yards. The wide receivers trio of Keylon Stokes, Josh Johnson, and Juan Carlos Santana with a combined 14.5 receiving yards per game and 3.7 touchdowns average is his primary recipient.

Tulsa’s ground game is still not well oiled, and its 4.0 yards per rush attempt and nine rushing touchdowns are still low among ranked teams. If the Golden Hurricanes were to improve their rushing game heading to Saturday, they should cause trouble to Cincinnati’s weak run defense.

Cincinnati’s will win; it won’t be enough to cover the spread

Cincinnati is unbeaten at the Nippert Stadium in 19 straight games. They also come into Saturday’s game fresh from last year’s heartbreak in the championship tie against the Tigers. Under the stewardship of Luke Fickell, the Bearcats will not afford any mistakes in this year’s stab at the championship and will make their superiority count. However, despite the underdog tag, Tulsa will not be an easy opponent. Cincinnati will have to dig deep and make money plays from the start against a top defensive unit. I back Cincinnati to win in this one but Tulsa’s defense to keep the win under double digits.

After extending their hot and San Diego’s cold streak, the Seattle Mariners will be looking to leave Petco Park with a two-game sweep as they take on the Padres this afternoon. Yesterday, the Mariners pounded out a dozen hits and plated eight runs, and Chris Flexen pitched 6.2 shutout innings to collect his third straight END_OF_DOCUMENT_TOKEN_TO_BE_REPLACED