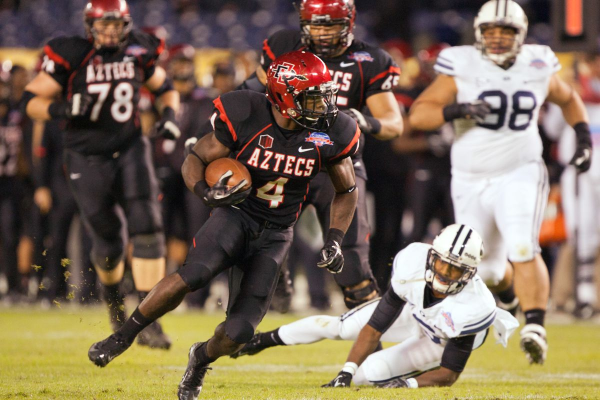 The Aztecs will be looking to put a statement in this game with an impressive win after recording mixed results in their last six games. Meanwhile, the Cougars will be looking to record a history of having double-digit wins for the first time since they last did it in the 2011 season.

The San Diego State Aztecs recorded an improvement of 4-3 for the season after securing a win in their last game against the Colorado State Rams with a scoreline of 29-17. The team’s defense had an outstanding performance during the 2nd half to ensure they emerged with a win from this game after taking a halftime lead of 23-17. They were, however, outgained by the Rams with a margin of 265-247 yards. They responded by winning the turnover battle with a 2-0 margin to ensure the win went their way.

The Aztecs Quarterback, Jordon Brookshire, led the team with his pass completion rate of 14 out of 24 in 130 yards, as well as one touchdown and 38 rushing yards. The San Diego State team has an average of 26.1 ppg on 343.9 total yards in each game this season. At the offensive end, the team is led by Greg Bell, who has managed 569 yards and six touchdowns, while Chance Bel has managed 272 yards and three touchdowns. Jordan Byrd has made some significant contributions with his rushing for 222 yards and two touchdowns. Defensively, the Aztecs have managed to hold their opponents to 16.3ppg on average in 269.1 yards in each game.

The Cougars are currently ranked in the 13th position, recording a loss in their last game against Coastal Carolina Chanticleers. Interestingly, Coastal Carolina Chanticleers are ranked in position 18. The 22-17 loss in this game saw the Cougars drop to 9-1 for the season. The team had outgained the Chanticleers by a margin of 405-366, but they lost the turnover duel by a 2-1 margin, leading to a defeat. Tyler Allgeier led the team in this game with his 106 rushing yards, one touchdown, and 13 carries.

This season has seen the cougars average a 44.5ppg with 522.7 yards in total for each game. In the offensive end, quarterback Zach Wilson leads the team with a pass completion rate of 73% for 2,964 yards, 27 touchdowns, and three interceptions. Defensively, the Cougars have managed to hold their opponents to a 14.7 ppg on average, with the total yards per game standing at 300.6.