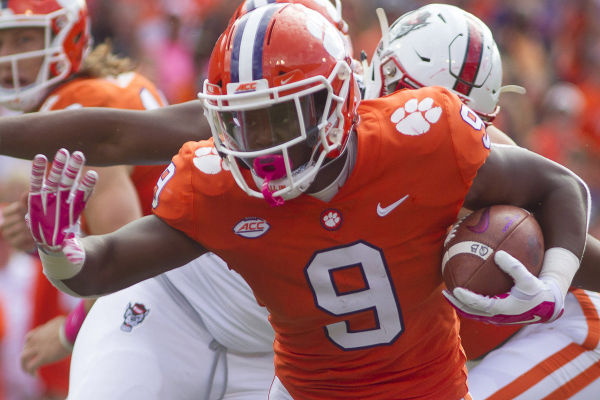 Week 2 of the college football season is already upon us, and this week features a very interesting matchup of top-25 teams. The No. 12 Texas A&M Aggies (1-0) will be traveling to Memorial Stadium to take on the No. 1 Clemson Tigers (1-0) on Saturday afternoon. Both teams looked solid in their openers, but this early matchup could have big implications for both teams’ hopes of postseason play. Kickoff for this matchup is scheduled for 3:30 pm ET.

Texas A&M is coming off of a solid 41-7 win over Texas State and seemed to be clicking on all fronts in its Week 1 matchup. Head coach Jimbo Fisher will have his work cut out for him this week, though, as the Aggies travel to face the defending national champions. Last year, these two met up, and Clemson just skated by with a 28-26 victory. This year, Texas A&M will hope it can get over the hump against the Tigers to earn the victory.

For Clemson, last week seemed like a walk in the park as it routed Georgia Tech 52-14. Still, Texas A&M will be a significantly tougher opponent than Georgia Tech, and while the Tigers won easily last week, there were some noticeable weaknesses to a team that lost a handful of players to the professional ranks.

The point spread for this one currently sits with the Clemson Tigers being 17-point favorites playing at home. The over/under on total points scored is set at 64.

With only one week of data under our belts, the rankings can sometimes be skewed by a good or bad game, but Clemson does come in at fourth in the nation in scoring at 52 points. For Texas A&M, their 41 points last week was good enough for 15th in the nation currently.

On the defensive side, Clemson ranks 23rd out of teams that have played in terms of yards allowed as they only gave up 294 combined yards last week. For Texas A&M, they come in 10th after giving up just 219 yards last week.

Clemson is 16-0 straight up at home over that span, while Texas A&M is 4-12 against the spread on the road against teams with winning records over that span.

Aggies Hoping For Big Game Out Of Mond

Last week against Texas State, Kellen Mond was sensational. He was 19 for 27 for 194 yards and three touchdowns while throwing one interception. He also rushed five times for 25 yards and an additional touchdown. Fisher will look for Mond to have even a bigger game on Saturday. Last year against the Tigers, Mond threw for 430 yards in the loss. They will need him to be equally as successful if they hope to pull off the upset.

Clemson’s win over Georgia Tech was never in any doubt last week, but that doesn’t mean that everyone played well. Star quarterback Trevor Lawrence struggled at times, going only 13 for 23 for 168 yards and a touchdown. He also had two interceptions in the win. Throw on top of that the fact that last year he went just 5 for 9 for 93 yards (albeit in limited action) against the Aggies, and Saturday will be a big game for Lawrence.

The Tigers’ other big star was sensational last week. Travis Etienne rushed just 12 times but still amassed 205 yards and three touchdowns. With Etienne in the backfield, if Lawrence can find his stroke, then Clemson will be awfully tough to contain. The leading receiver for Clemson last week was Tee Higgins, who pulled down four catches for 98 yards and a touchdown.

Clemson Wins But Can It Cover?

As much as I like Texas A&M to take a big step forward this year, Clemson is just too tough and too deep for most teams to contend with. As a result, I think that ultimately, they are going to pull away for a victory in this one. What I don’t know if whether they will be able to pull away by 17 points. Texas A&M is solid on both sides of the ball, and if Mond can get in a groove, this one could get interesting down the stretch. Ultimately, I like Clemson to win, but I don’t think they cover the spread. I am taking Texas A&M at +17 in this one.