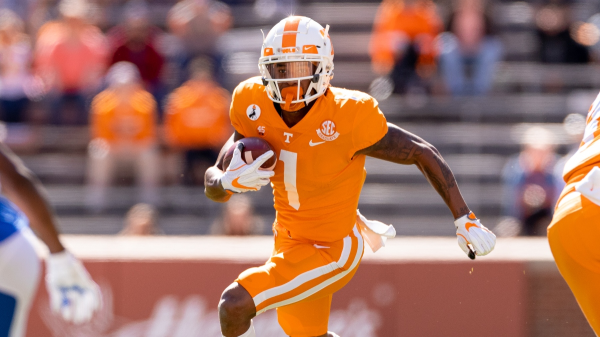 After winning only one SEC game in the previous three seasons, it has taken only five games of the Sam Pittman era for Arkansas to surpass that total. The 2-3 Razorbacks have strides to make, as shown in last week’s 42-31 loss at Texas A&M. There are also clear reasons for fans to feel optimistic about the present and future of their program, with their two wins along with a lot of inspired play against three ranked teams in their losses.

This week, they welcome Tennessee, who comes in with a similar 2-3 record. While there is a reason for having confidence for Arkansas, the needle is headed in the wrong direction in Knoxville as things have gone off the rails after a promising start.

The Volunteers had elevated expectations after a promising finish to Jeremy Pruitt’s second season, and a 2-0 start this season only served to add to those expectations. But they will head to Fayetteville having lost three in a row, all by resounding margins, and desperately need a win to restore some faith.

Despite their current slide and how Arkansas has played thus far, the Vols are a small betting favorite in this one. Will they back up the odds, or will the Razorbacks run wild?

Can Jarrett Guarantano get it going? Guarantano (914 yards, 6 touchdowns, 3 interceptions this season) has shown flashes over his career, but he hasn’t made the expected leap yet and has not been good in the Vols’ losing streak. After another subpar showing in their blowout loss to Alabama two weeks ago, there has been a lot of speculation about his position. But Pruitt continues to stick by him, perhaps for no other reason than his other options not being any better. Whatever the reason, he will need to reward that show of faith this week.

Arkansas has picked off nine passes this season, all in their two wins (three vs. Mississippi State, six vs. Ole Miss), and three have been returned for touchdowns (one vs. MSU, two vs. Ole Miss). Guarantano threw pick-sixes on consecutive drives against Kentucky three weeks ago. If he has similar troubles Saturday, it could spell doom for the game and the remainder of his collegiate career.

The ground game will be vital: Both offenses have a talented duo in the backfield. For Arkansas, it’s Rakeem Boyd (51 carries, 188 yards, 2 touchdowns), and Trelon Smith (61 carries, 251 carries & 15 catches, 114 yards, 1 TD). Boyd ran for over 1,000 yards last season but was off to a slow start this season before running for 100 yards on 18 carries against Texas A&M last time out. If he is on his way back to his best, it could be a long day for Tennessee. If he does have a big day, it won’t be a surprise: Boyd has nine career 100-yard games; seven have come at home.

On the opposite side, Ty Chandler (62 carries, 275 yards, 2 TD) and Eric Gray (79 carries, 355 yards, 2 TD & 16 catches, 123 yards, TD) will pose a challenge for Arkansas. The Razorbacks are giving up an average of 178 rushing yards per game and an average of 4.5 yards per rush, both of which rank 12th in the SEC. So if the Vols can take advantage of that, it may limit the need for Guarantano to have to win the game with his arm.

Will it be a big day for Feleipe Franks? The former Florida quarterback has been a big part of why Arkansas has had a promising start. In five games, he has completed 66% of his passes for 1,213 yards, 11 touchdowns, and 3 interceptions. Only one of those picks has come in his last four games.

Tennessee has allowed opposing quarterbacks to complete 67% of their passes thus far. That bodes rather well for Franks. He also ran for a career-high 91 yards against Texas A&M, so the visitors need to be wary of that threat as well.

Over 52.5: Both teams have had some bright moments defensively, but it is tough to see this game being dominated by both defenses, which have weaknesses that play into their counterparts’ strengths.

Arkansas Over 25.5: Of the two offenses, Arkansas’ looks the most capable at present. And the high potential to rack up another pick-six defensively or give Franks a short field to work with a time or two only makes this more appealing.

When it comes down to who takes this one, who’s the best bet? Perhaps a week off will prove to be what Tennessee needed. They have an edge in the talent department.

However, Arkansas has shown a lot more promise and production thus far this season, and they’ve done so against some strong opposition. Take Arkansas +2 and to win at +104.