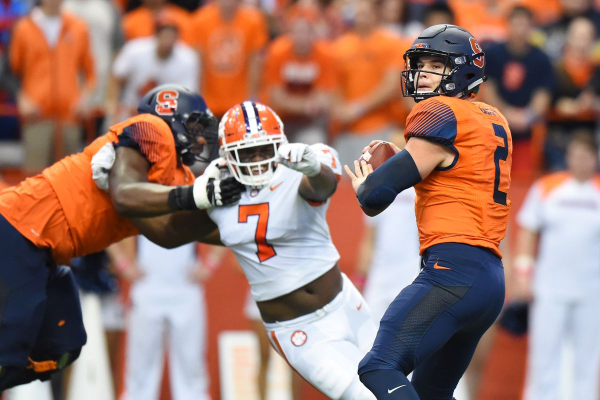 The Clemson Tigers and the Syracuse Orange will be meeting on Saturday, the 24th of October at 16:00 UTC. The super NFL showdown will take place at the Memorial Stadium, Clemson, USA.

The Syracuse Orange will be looking for a comeback from their most recent game against Liberty Flames, which they lost by a 38-21 final score and a 1-4 record. The team’s quarterback Rex Culpepper played pretty well in the air, throwing for 211 yards, scoring three touchdowns with only one interception. The Tigers’ wide receiver, Taj Harris was the main mark for Rex and the team; he secured nine catches for nine yards and scored one touchdown.

The Syracuse Orange defense had a difficult time in the game against the Liberty Flames, letting the Flames get 38 points past them and bag 520 yards of offense. The Syracuse team, however, was behind the Flames backfield enough times, seeing as linebackers Mikel Jones and Lee Kpogba, and the defensive back Trill Williams all had TFLs. The linebacker, Tyrell Richards, headed the Syracuse defense with nine tackles.

The Clemson Tigers, on the other hand, will be marching into this game with their heads held high. They have their 5-0 record, having secured a hefty win in their most recent game against the Georgia Tech Yellow. The Tigers beat the Yellow Jackets 73-7 at the Bobby Dodd Stadium, Atlanta. The Tiger’s quarterback, Trevor Lawrence, had an all-round great game as he completed 24 out of his 32 pass attempts for 404 yards and scored five touchdowns with only one interception. The wide receiver, Amari Rodgers, was the ultimate mark for Trevor and the team, as he secured six catches for 161 yards and scored two touchdowns.

The Clemson defense did a great job in the game against the Yellow Jackets, only allowing them seven points and 204 yards of offense. LB Trenton Simpson and Cornerback Andrew Booth Jr. headed the Tigers’ defense securing six tackles each.

Oranges Praying for a Comeback

Most fans would agree that there is hardly a chance of the Oranges emerging victorious in this matchup. However, the Oranges will be giving all they have got in Saturday’s game as they are vying for a win.

In the hope of a victory in this match, the team will have to rely on their offense, headed by the senior quarterback, Rex Culpepper, and the WR, Taj Harris. Culpepper has thrown for 324 yards, scored four touchdowns with only two interceptions. Harris has made his rounds with 26 catches for 434 yards and four scores.

The defense, headed by LB Tyrell Richards, needs to put in more effort to have a shot at this game.

The team, however, has quite the record of injured players who might not be available for the game on Saturday, including; T. Richards, Q. White, A. Red, S. Linton, W. Froumy, T. Devito, A. Cisco, J. Howard, A. Adams, P. Davis, D. Davis, E. Coley and R. Hanna. Jawhar Jordan is out indefinitely.

Clemson Tigers Set to Retain the Number One Spot

The Clemson Tigers offense is in great shape and has not lost a game this year. They have Lawrence at the forefront, leading the offense. In his 35 games played, he scored 635 out of 952 attempts for 8,489 yards and maintained an average of 242.5 yards per game in the air. Lawrence has scored 81 touchdowns and has a quarterback rating of 167.0.

The Tigers also have their share of injured players including, J. Foster, J. Ross, D. Jefferies, T. Phommachanch, D. Uiagalelei, and L. Price. These players’ availability for Saturday’s game is uncertain. However, J. Ross and L. Price are out for the season.

The Clemson Tigers hold all the cards in the offense, ranking 1st in the ACC preseason polls, with 2,008 votes, and a 48.4 points per game average this season. The team has amassed a total of 1,740 passing yards this season and an average passing yard of 384.0 per outing. The Syracuse Orange, on the other hand, ranked 14th, with 449 votes and a 19.6 PPG this season. The team has pulled a total of 1,324 yards this year and 82.4 yards on the ground.

On the defense, the Tigers also rule the field, only allowing an average of 12.0 points per game. In comparison, the Syracuse Oranges have given 29.6 points per game on average.

We believe that without a doubt that the Clemson Tigers will win this fixture.