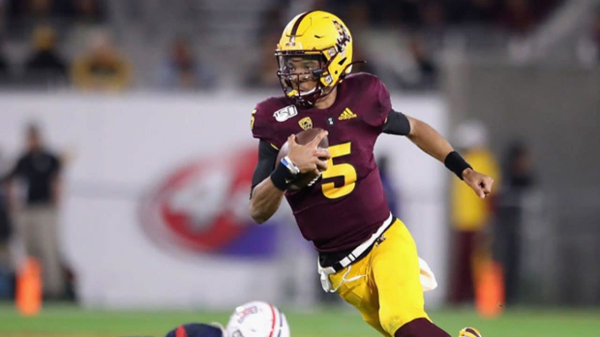 Just because the College Football Playoff semifinals have passed doesn’t mean bowl season is over. On New Year’s Eve, one of the many bowl games this week takes place in El Paso, Texas, as Florida State (6-6) faces Arizona State (7-5) in the Sun Bowl.

Here is a preview for Tuesday’s Sun Bowl, along with odds and a free pick.

It’s been a year of change for Florida State, which defeated Syracuse and Louisville but fell to Clemson and Florida. Following a loss on Nov. 2 to Miami, head coach Willie Taggart was fired. A little over a month later, the Seminoles hired Mike Norvell as their next coach.

Prior to being the head coach at Memphis, Norvell was the offensive coordinator for Arizona State under Todd Graham.

Under Taggart and interim coach Odell Haggins, Florida State averaged 29.1 points per game on offense and 403.2 yards. The Seminoles only allowed 28.5 points per game as well, but on a significant 436 yards.

As far as the main players to watch, the Seminoles will be led by sophomore quarterback James Blackman. After Alex Hornibrook left the program in November and transferred to Wisconsin, Blackman has thrown for 2,095 yards and 16 touchdowns.

His favorite target is wide receiver Tamorrion Terry, who has 51 catches for 1,023 yards. But Florida State will also be without junior running back Cam Akers, as the 1,000-yard rusher is skipping the game to prepare for the NFL Draft.

Arizona State has had a couple of notable wins this season, beating ranked teams Michigan State, California and even No. 6 Oregon. But losses to bad teams like Colorado and UCLA hindered its chances of improving from being a middle-of-the-pack bowl team.

This season, the Sun Devils averaged 25.2 points per game and almost 380 yards of total offense. Edwards, a former NFL safety, helps coach a defense that allowed only 23.1 points on about 387 total yards.

Under center, the Sun Devils have put their faith into true freshman quarterback Jayden Daniels, who finished the regular season with 2,748 yards and 17 touchdowns. He has also run for another 319 yards and has thrown 129 passes without an interception.

However, Daniels will have to play without two of the team’s top weapons, as running back Eno Benjamin and receiver Brandon Aiyuk are skipping the game to prepare for the NFL Draft.

Florida State will win if: The pass rush shows up in a big way. Florida State has just 29 sacks this season, but 19 of them came in only three games. So while it’s not a consistent unit, it’s still one that is capable of performing well.

This game should be a good spot for them, as Arizona State has one of the worst offensive lines in the nation in terms of sacks allowed. The Seminoles will want to pressure Daniels all game and allow their own quarterback, Blackman, to have plenty of time on the field.

Arizona State will win if: Daniels goes crazy. A few weeks ago, against then-No. 6 Oregon, the world saw Daniels hang 408 yards on the Ducks. The freshman has been efficient and careful with the football and is going against a Seminoles defense that is injured in its secondary and hasn’t recorded an interception in six games.

With no Benjamin to lead the running game, Daniels will need to beat Florida State through the air all game long.

On a neutral field in El Paso, the Sun Devils are slight favorites against the Seminoles, listed at -4. This game is a little harder to predict, with both squads playing without key offensive players. However, I think Arizona State has the quarterback advantage and will make fewer mistakes throughout the game. Give me Arizona State -4.