Stanford vs. UCLA Preview: Will Felton and the Bruins Run Over the Cardinal? 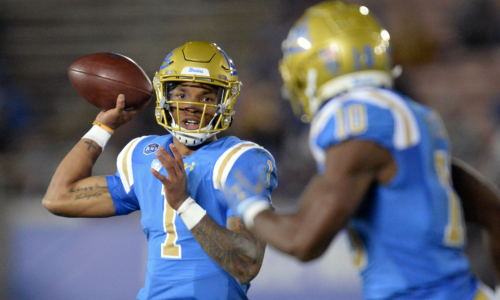 After a tough start to the season, Stanford has hit their stride over the last few weeks. The Cardinal (3-2) have won three in a row heading into their finale at UCLA (3-3). The Bruins, coming off of a tough 43-38 rivalry loss to USC, are favored by 6.5 in a matchup that will kick off at 7 pm ET/4 pm PT on ESPN.

Will the Bruins secure their first .500+ finish of the Chip Kelly era, or will the Cardinal win a fourth in a row to end their season on a high?

Stanford opened its season with back-to-back losses to Oregon and Colorado, but three close road wins in a row see the Cardinal in position to bounce back from a poor 2019 with a winning season. Stanford has already announced that they will not be playing in a bowl, so this is their season finale.

The Cardinals have stepped up in the clutch on all sides of the ball in their win streak. At Cal, a blocked extra point in the final minute gave them a 24-23 win over their archrivals. At ranked Washington, they held the ball for the final 7:54 to preserve a 31-26 win. Last week at Oregon State, they took a late lead on a field goal, then forced a turnover as the Beavers were closing in on a tying or winning score, securing a 27-24 victory.

Stanford averages 25.6 points and 392.2 yards per game offensively. Quarterback Davis Mills has been efficient, completing 65.3% of his passes for 1,076 yards and four touchdowns. Mills has not thrown an interception all season in 147 attempts. On the ground, the Cardinal averaged only 133.8 yards per game, but running back Austin Jones (458 yards, 7 TD, 17 catches, 123 yards) has three 100-yard games this season, including a 126-yard effort last time out.

Defensively, Stanford allows 28.6 points and 429.8 yards per game. They have lost the yardage edge in four of five games this season, but it has been less of a factor during their win streak. That being said, the Cardinal do give up an average of 208.2 rushing yards per game, which could prove to be pivotal against UCLA.

With a win over the Cardinal, UCLA would match their win total from last season in five fewer games. That would be a positive sign for the future for the Bruins, who are also forgoing a bowl opportunity with the ongoing pandemic in mind.

While there are signs that the program is moving in the right direction, this season could have been even better for UCLA, as all three of their losses have been by six points or fewer. Last week against USC, the Bruins led 35-23 in the fourth quarter, and after surrendering the lead, went ahead 38-36 with 52 seconds remaining. But the special teams and defense could not lock down the win, as the Trojans followed a 56-yard kickoff return by scoring the go-ahead touchdown in only two plays.

After giving up only 28 points in their previous two games, allowing 43 points was a big step backward for UCLA. That said, the offense had a hand in that, with USC turning three UCLA turnovers into 17 points. That negated another strong performance by an offense that is averaging 33.5 points and 450.3 yards this season. Quarterback Dorian Thompson-Robinson has been productive, throwing for 1,055 yards and 12 touchdowns and rushing for 260 yards and three touchdowns. He was 30 of 36 for 364 yards and four touchdowns against USC, but he did throw two picks that led to 10 points.

On the ground, the Bruins are led by Demetric Felton, who has run for 668 yards and five touchdowns and has caught 22 passes for 159 yards and three touchdowns. Felton has found the end zone in all but one game this season and scored two receiving touchdowns against USC.

Defensively, UCLA gives up 27.8 points and 384.8 yards per game. Stanford’s offensive weakness matches up with UCLA’s defensive strength, as the Bruins allow 136.3 rushing yards per game vs. 248.5 passing yards per game. The Bruins have 45 tackles for loss and 21 sacks, led by Caleb Johnson (34 tackles, 7 TFL, 5.5 sacks), Osi Odighizuwa (28 tackles, 6 TFL, 4 sacks), and Mitchell Agude (18 tackles, 8.5 TFL, 2 sacks). UCLA is eighth in the FBS in sacks per game and tied for 24th in tackles for loss per game, so Stanford’s protection will have to be sharp.

•          Three of UCLA’s six games have gone over that total. Only one of their three previous home games has, which was last week’s loss to USC.

Since both teams are not playing in a bowl game, they will be aiming for a good performance in this one to end the season positively. Stanford’s defense has done a good job of not breaking too often during their win streak, but they will meet their match in a potent UCLA offense. The Cardinal will be productive as well, but they will not be productive enough to keep the Bruins from wrapping up a winning season.