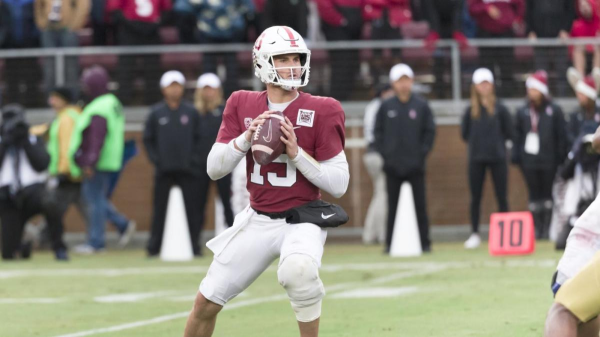 The Stanford Cardinal (0-2) and the California Golden Bears (0-2) meet on Friday the 27th of November at the California Memorial Stadium, Berkley, the USA, for some college football action. The match is scheduled to kick off at 4:00 PM EST and will be aired on the FOX TV Channel from start to finish.

After having their game against Washington State canceled due to COVID-19 complications, the Stanford Cardinal still stands at a 0-2 overall record. The Cardinal pitched against the Colorado State Rams in their last match which ended in a 35-32 loss. The Cardinal’s performance in the game was commendable especially their offense, which played way better than they had been playing throughout the season. The Stanford Cardinal offense was able to gain a total of 397 yards in the game, 327 yards in the air, and 70 yards on the ground.

Stanford quarterback Davis Mills made passing look easy, throwing for 327 yards in the game, Davis also happened to lead on the ground with six attempts in 36 yards and a touchdown. Meanwhile, wide receiver Michael Wilson made 6 catches in 95 yards.

The Stanford Cardinal offense has averaged 23.0 points per game so far in the season, ranking 96th in the league. The Stanford team has gained an average of 405.0 yards total, 271.5 in the air, and 133.5 on the ground.

Nathaniel Peat is the lead rusher this season with 11 attempts in 114 yards. Meanwhile, the Stanford wide receiver Simi Fehoko leads with eight receptions in 162 yards.

When it comes to fending off attacks, Stanford Cardinal has not done so well, allowing 35.0 points per game, and giving up an average of 464.0 total yards. The team has failed to prevent their opponents from passing for an average of 241.0 yards and rushing for 223.0 yards in their territory. On defense, the Stanford Cardinal ranks 99th on the league tables.

The Stanford Cardinal has quite a number of players who might be absent from the game on Friday night including Branson Bragg (G), Dorian Maddox (RB), Jacob Mangum-Farrar (LB), Ricky Miezan (LB), and Kyle Petrucci (LS).

Will the California Golden Bears offense surprise their fans?

In the match, the California Golden Bears gained a total of 439 yards, 315 in the air and 124 on the ground. California quarterback Chase Garbers passed for 315 yards scoring three touchdowns with two interceptions, while Marcel Dancy the California running back ran for 76 yards with 17 carries. Meanwhile, wide receiver Kekoa Crawford caught ten throws in 141 yards scoring a touchdown.

In offense this season, the Golden Bears have gained just 18.5 points per game, ranking 114th on the league tables. The California Golden Bears have gained an average of 307.5 total yards, 218.5 yards in the air, and 89.0 yards on the ground. Star quarterback for the season Chase Garbers has so far thrown for a total of 437 yards with three touchdowns and three interceptions while running back Marcel has rushed for 80 yards with 19 carries. Meanwhile, Kekoa Crawford has secured 11 receptions in 151 yards, while scoring a touchdown.

The California Golden Bears are lucky to have all players cleared for the game on Friday.

Both teams have just about an equal amount of talents, the difference being that the Stanford Cardinal offense has really improved as shown in their last game, and fans are hoping to see the same, if not better, on Friday.