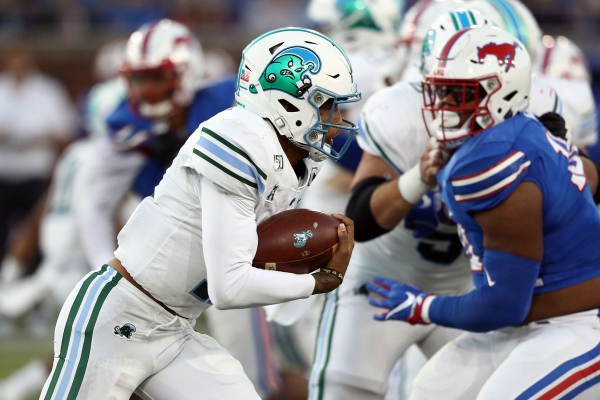 SMU is off to a 4-0 start. They are definitely looking like a conteder in the American Athletic Confernce and we will know for sure when they host Cincinnati next week. Friday night games can get a little wacky and on the road, this is not going to be an easy one for the Mustangs, especially with top receiver Reggie Roberson out for the rest of the season with an injury. QB Shane Beuchele has been good about spreading the ball around, but he needs to find a new top target.

Tulane is just 2-2. They definitely have an identity – they want to run the ball – but have struggled when the competition has been better, as evidenced by losses to Houston and Navy, the two best teams on their schedule. Last week they got beat up pretty good by the Cougars, losing 49-31. Even though they lost by 18 the score was actually more flattering than it should have been, as the Green Wave scored one TD on an interception return and another on a fumble. They were up 24-7 at one point, but could never get that running game going and eventually lost. They are in definite need of a bounce back at home.

This one opened at -7, but it looks like the markets like the idea of getting a home underdog and the line has moved a little. I am more than OK with that as I like the SMU side much more in this one. The only thing that has me worried is whether the Mustangs will have success stopping the run, but they can load up on that and dare the Green Wave to beat them through the air. I am very confident the Mustangs will be able to move the ball on offense. Roberson is great but there is enough depth to overcome his absence.

SMU has won the last five in the series and covered in four of those. These teams play each other every season so those results are a little more meaningful, as they include many current players and coaches.

This one might not move much more so feel free to get down on this one now. As long as you are giving less than 7, it is a great play.

As much as I like SMU to win and cover tonight, if you can make a case for a home underdog winning then there is definitely some value. In this case it is simple. If Tulane can run the ball and really shorten the game as a result, they can pull off the upset. Last year they had more yards of offense than SMU, but lost a couple of fumbles that did them in. If they clean that up they can take this game.

The last two games in the series have gone under. These teams are coming in with opposite records for totals on the season. SMU has just one over in four games while Tulane has not had a game go under yet this season. This total is kind of in the middle of the the total numbers in the series of late. In the last five, the results have not been close to the final number; there has been at least a 5.5 point difference one way or the other. For this one, the numbers looks pretty sharp though. For these non-Saturday games I always lean towards a little more offense than expected. SMU is averaging 44ppg and neither team is better than average on defense.