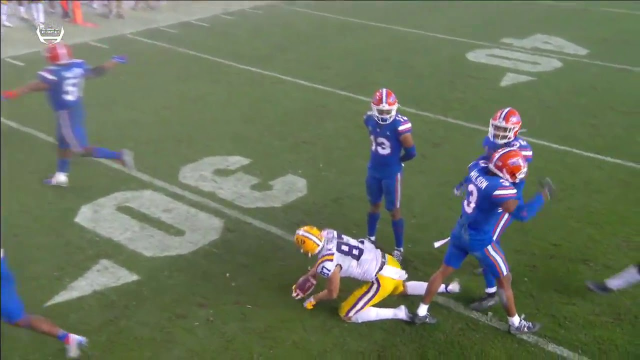 Going into Saturday night’s matchup with LSU, the Florida Gators had been one of college football’s hottest teams and were in a position to land in the College Football Playoff if they beat Alabama in the SEC Championship Game. Not only was that hope still in sight, but star quarterback Kyle Trask still had every chance to win the Heisman Trophy if he could lead the Gators over fellow Heisman front-runner Mac Jones and the Crimson Tide.

But a 3-5 LSU team that had been depleted and shown little ability to stop anyone came to play in Gainesville, and perhaps the Gators got caught looking ahead to Alabama. Florida, who was favored by more than three touchdowns, outgained LSU 619-408. But three turnovers, including two interceptions by Trask, undid them. So did a costly shoe throw by defensive back Marco Wilson that drew a personal foul penalty after a key third-down stop.

Both sides matched each other blow for blow throughout the game, but in the end, the Gators could not match LSU’s last blow. LSU’s Cade York nailed a 57-yard field goal with 23 seconds left, and after Trask had completed three passes to move the ball into field goal position, Florida’s Evan McPherson missed a 51-yard kick on the game’s final play to seal a crushing 37-34 upset.

The Gators still have the SEC title game to look forward to, but the latest college football futures odds show how their individual and team hopes have been decimated by their defeat.

Trask’s Heisman Hopes All But Done?

It has been an amazing season for Trask, the nation’s leader in passing yards (3,717) and touchdown passes (40). At one point, it looked like the Heisman Trophy was he to lose, though Alabama’s Jones had moved ahead recently.

With Jones throwing for only 208 yards and no touchdowns in Alabama’s win at Arkansas in an early game, Trask could have helped his cause with a big night against LSU. He did tie his season and career-high with 474 yards and tossed two touchdown passes. But after throwing only three interceptions all season, including none in the previous four games, he threw two on back-to-back drives in the second quarter, one of which was returned for a touchdown.

Now it would appear that the Heisman is all but in Jones’s hands. His numbers, while excellent, don’t match Trask’s, but he is having a great season for the 10-0 and top-ranked Crimson Tide. In the latest Heisman odds, Jones is now a heavy favorite at -250 to take home the hardware, while Trask has dropped to +400. Trask has gone from being in a tight race with Jones to not being far ahead of Alabama receiver Devonta Smith, who has jumped to +500. Smith was held to only three catches and 22 yards against Arkansas but had an 84-yard punt return touchdown, his 17th total touchdown of the season.

Jones, Trask, and Smith are the runaway top three, with Notre Dame quarterback Ian Book at +1600 and Clemson’s Trevor Lawrence at +1800.

Due to an early loss to Texas A&M, the Gators were unlikely to end up in the CFP if they lost to Alabama, barring upsets elsewhere. But the chance was still there for them to win their way in. Now, even beating Alabama is not likely to be enough to earn a playoff berth.

As such, Florida has fallen to +10000 to win the national championship, which reflects the miracle it would take for them to end up in college football’s final four.

Alabama remains the national title favorite, going into the SEC title game at -125 to win the title. Clemson is second at +250, reflecting the belief that they will defeat Notre Dame for the ACC title and book their spot. Ohio State, granted a place in the Big Ten championship game after the conference’s six-game requirement was waived, is +500 heading into their meeting with Northwestern. Notre Dame, who stands to end up in the playoff even with a loss to Clemson, is at +800.

If results don’t go as expected, the likes of Texas A&M and the winner of the Big 12 title matchup between Iowa State and Oklahoma would be poised to benefit. That trio of teams is at +6000, with Northwestern and undefeated Cincinnati joining Florida at +10000.