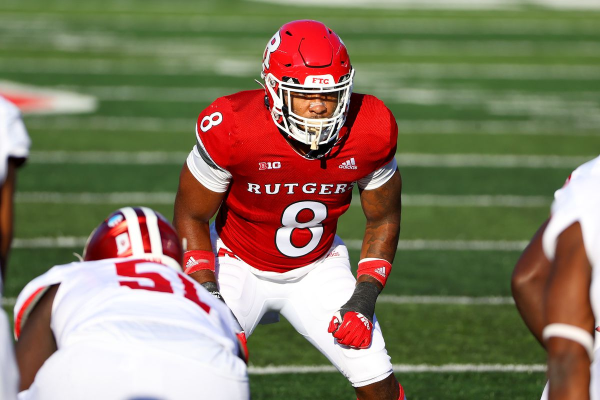 Ohio State is third in the country and looking every bit like a national championship contender despite starting its season late due to COVID-19. The Buckeyes (2-0) host Rutgers (1-1) at 7:30 p.m. ET Saturday looking for a third-consecutive prolific offensive showing after rolling up 90 points in victories over Nebraska and Penn State, while the Scarlett Knights aim for at least a better showing after committing three turnovers in last week’s 37-21 loss to No. 17 Indiana.

The Buckeyes wasted little time getting started in last week’s 38-25 victory at No. 18 Penn State, going for 62 yards on their first snap as quarterback Justin Fields finished with his second-consecutive 300-plus yard passing game. Master Teague rushed for 110 yards and a touchdown, and Ohio State finished with 208 yards on the ground.

Rutgers quarterback Noah Vedral threw three interceptions – two in the first half that set up Indiana touchdowns – as the Scarlett Knights allowed 17 second-quarter points and trailed 20-7 at halftime, one week after knocking off Michigan State 38-27 on the road. Bo Morton caught two touchdown passes and has at least one reception in 14 consecutive games.

The Buckeyes as a resounding 38-point favorite from the betting sites who have odds on the game (several do not). The over/under for total points is 64.5, while Rutgers’s money line is +2000, and Ohio State’s money line is -15000.

The Buckeyes are off and running thanks to one of the nation’s most dynamic offenses, ranking fourth nationally and tied for first in the Big 10 in scoring at 45 points per game. Ohio State has been balanced in rolling up a conference-best 508.5 yards per game (10th nationally), ranking second in the league in rushing (211.5 yards per game) and third in passing (297 yards per contest).

Ohio State has been more than good enough so far defensively, limiting opponents to 21 points per game (third in the conference; 19th nationally). The Buckeyes are surrendering 347.5 yards of total offense (fourth in the Big Ten): 127 yards rushing and 220.5 yards passing on average.

Rutgers features one of the better run defenses you haven’t heard of this season, ranking second in the Big Ten and fourth nationally at 79.5 rushing yards per game. It hasn’t been as good for the Scarlett Knights defending the pass, allowing 278.5 yards per game, and overall Rutgers is surrendering 358 yards and 32 points per contest.

The Scarlett Knights stumbled offensively after a strong showing in the opener, and through two games rank eighth in the conference in scoring at 29.5 points per game. Rutgers is last in the league in total offense (261.5 yards per game) and passing (148 yards per contest), while its rushing game is 11th at 113.5 yards per game.

Ohio State Clicking on Both Sides of the Ball

Fields draws plenty of attention and rightly so, ranking second in the league and third nationally in passing efficiency (214) while completing 87.3 percent of his passes for 594 yards, six touchdowns, and no interceptions. Chris Olave and Garrett Wilson are the first pair of Ohio State receivers to register 100-yard receiving games in back-to-back contests, combining for 31 catches and 464 yards.

A pair of Buckeyes come in after big defensive performances against Penn State. Defensive tackle Tommy Togiai led the Buckeyes last week with career highs in sacks (three) and total tackles (seven), earning Big Ten Defensive Player of the Week. Defensive end Jonathon Cooper registered a career-best five tackles and was named the co-Senior of the week by the Reese’s Senior Bowl.

Linebacker Olakunle Fatukasi is off to a hot start defensively, recording double figures in tackles for the second straight week with a career-high 14 stops against Indiana. He earned the Bednarik Award for the National Defensive Player of the Week after making ten tackles, recovering two fumbles, and forcing a third against Michigan State. The Scarlett Knights opened the season by limiting the Spartans to 50 yards rushing and collected seven takeaways (five recovered fumbles, two interceptions).

Vedral went 18-for-29 in his Rutgers debut against Michigan State in the season opener, and has passed for 1,022 yards and rushed for 236 in a career that’s also seen him play at Central Florida and Nebraska. Melton – who caught 30 passes for 427 yards a season ago – has led the Scarlett Knights in receiving in both games this season. Rutgers ran just 13 first-half plays after scoring midway through the first quarter last week, a recipe it cannot repeat to have any chance Saturday.

The Odds Say This One is all Ohio State

The Buckeyes have won 21 straight home games, and there’s no reason to think that streak won’t be 22 games come Sunday morning. Ohio State has scored at least 49 points in all six meetings with Rutgers since the Scarlett Knights joined the Big 10 in 2014. Covering a 38-point spread is not easy, but look for the Buckeyes to do just that with ease as Fields has his way against the Rutgers defense.