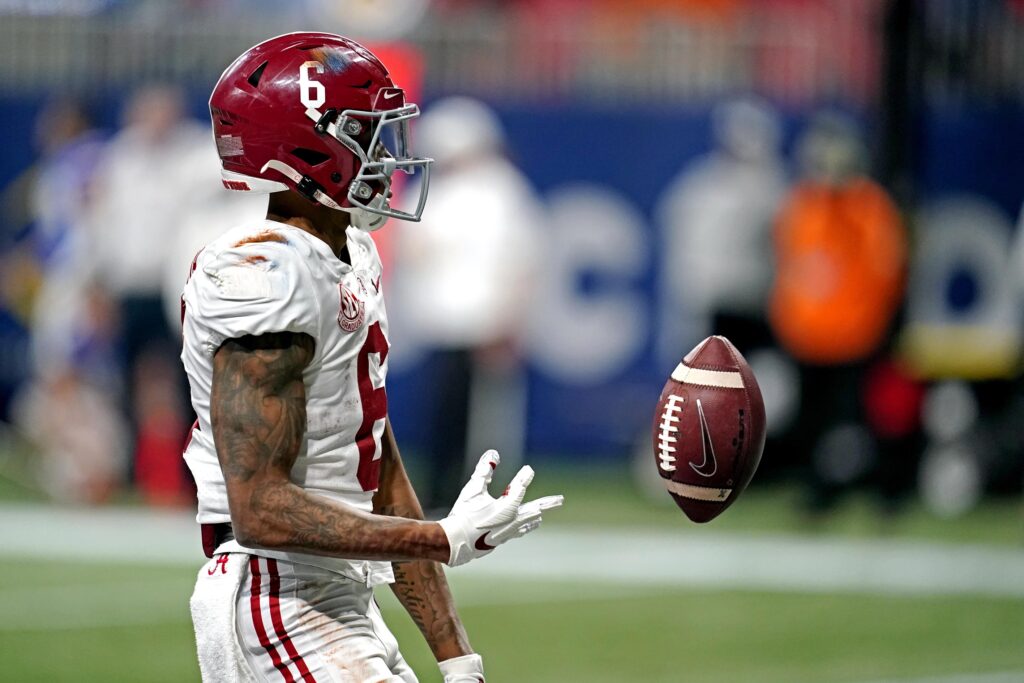 No. 1 Alabama makes its way back to the College Football Playoff after missing last year’s event for the first time in six years. They will face No. 4 Notre Dame in the Semifinal at the Rose Bowl, which will take place at AT&T Stadium in Arlington, Texas, due to COVID-19 restrictions in California.

Notre Dame, who is coming off of a beat down at the hands of No. 2 Clemson in their first (and probably last) ACC championship game, makes their second playoff appearance and looks to prove they belong among college football’s elite. They will enter as the biggest underdog’s in CFP history, currently getting 19.5 points on Fanduel.

The Crimson Tide became the first team in SEC history to go 10-0 against conference foes in a single season. They also became the first team to have three players finish in the top five in  Heisman voting since Army did it in 1946. Quarterback Mac Jones and Wide Receiver DeVonta Smith finished in the top four and will be part of the virtual Heisman ceremony on January 5. Their teammate and running back, Najee Harris, finished fifth in the final voting. Before the Heisman Ceremony takes place, this three-headed offensive monster will have their minds on getting Alabama back to the National Championship game for the fifth time in the last six seasons. They come into the game averaging 49.7 points per game.

The last time they played Alabama was in the 2012 BCS National Championship, a game in which they were dominated 42-14. Two years ago, they were smothered by Clemson 30-3 in their first College Football Playoff appearance. Most recently, that same Clemson team made it look like that gap had not closed, running them off the field 34-10 in the ACC Championship game. Notre Dame is 0-6 in BCS, New Year’s Six, and College Football Playoff games. They look to write a new narrative against a heavily favored Alabama team.

Notre Dame received good news on the injury front, as starting safety, and Third Team All-American Kyle Hamilton is expected to be 100 percent after he suffered an ankle injury in the ACC Championship game. Notre Dame lost starting center, Jarrett Patterson, for the season, but back-up Zeke Correll is expected to be fully healthy after injuring his ankle in his first game as the starter.

Alabama also lost their starting center, Landon Dickerson, after he suffered a knee injury in the SEC Championship game against Florida. Coach Nick Saban left the door open for the return of outstanding wide receiver Jaylen Waddle, who has been out since Week 4 with an ankle injury. Coach Saban said Waddle was back running but had not participated in practice, making it seem unlikely he could return for the Semifinal game.

Alabama’s offense has been incredible this season. They are averaging 49.7 points per game, and that is even after losing one of the nation’s top receivers in Jaylen Waddle. They haven’t missed a beat, as DeVonta Smith has stepped right in as the top playmaker on the team, catching 98 passes for 1,511 yards and 17 touchdowns. If he doesn’t hear his name called as the 2020 Heisman Trophy winner, it will probably be because his quarterback, Mac Jones, is taking home the trophy. Jones has thrown for over 3,700 yards, 32 touchdowns, and only four picks. He also leads the nation in quarterback rating. If that weren’t enough for Notre Dame to deal with, they will also have to try and contain running back Najee Harris who has accounted for 27 total touchdowns on the season.

Notre Dame brings one of the nation’s top offensive lines and rushing attacks to the Rose Bowl. Running Back Kyren Williams won Offensive Rookie of the Year in the ACC, and will need a big game to control the clock and keep the high powered Alabama offense off the field. Quarterback Ian Book will need to bounce back from a poor performance in his last outing and get back to the level of play that propelled him into a top 10 finish in the Heisman voting. If Book can get back to making smart decisions, and making the off-script plays he is so good at, Notre Dame could hang in the game into the fourth quarter.

This game could come down to whether or not Notre Dame can establish the line of scrimmage on the offensive side. They have a great, experienced offensive line, most of whom were on the 2018 team that got dominated in the Playoff against Clemson. If they can bounce back and establish a run game, look for Notre Dame to try and control the clock and keep Jones, Smith, and Harris on the sideline as much as possible. Notre Dame brings two All-Americans on the defensive side, but Alabama has six on their offense, and it will be too much firepower in the end for Notre Dame to keep up. I like Notre Dame to keep things close early, but Alabama will have too many athletes and playmakers on the offensive side, and Ian Book and the Irish offense won’t be able to keep up. Look for Alabama to pull away late, but not quite cover the huge spread.