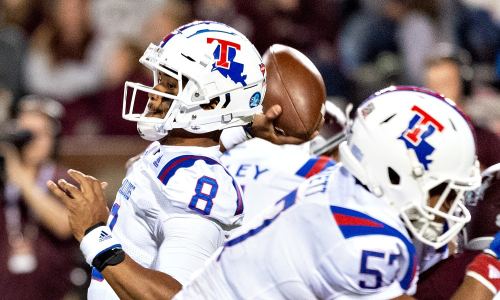 College Football Bowl Season is upon us, and with it, an opportunity to cash in on many different wagers. Let us dive into the R+L Carriers New Orleans Bowl and all the information necessary to make great bets.

The R+L Carriers New Orleans Bowl will be played at Mercedes-Benz Superdome in New Orleans, Louisiana. The 7-5 Georgia Southern Eagles take on the 5-4 Louisiana Tech Bulldogs. Fanduel has Georgia Southern listed as a 4.5 (-112) point favorite, with the moneyline at -225, and the total at 48.5. Georgia Southern is coming off of a 26-34 loss to Appalachian State and Louisiana Tech is reeling from their worst loss of the season. The Eagles have covered the spread 58.4% of their games this year against the Bulldogs’ 44%. Combined, the teams are 12-7 in over point totals on the season.

Georgia Southern enters the game averaging 5.4 rushing yards per attempt and 262.5 yards per game. Running back J.D. King is out with a knee injury, but the stable of backs led by Logan Wright and Wesley Kennedy should find ways to make it happen behind the offensive line. Louisiana Tech allows 195.8 rushing yards per game and will have its hands full in this matchup. Justin Tomlin may have to step in for the injured Shai Werts at quarterback, but the game plan will rely heavily on the run either way.

Louisiana Tech makes its proverbial money in the passing game. That strategy took a major hit when quarterback Luke Anthony went down in the game against Texas Christian University (TCU) in their final regular-season contest. In relief, Aaron Allen was 5/11 for 31 yards and two interceptions. Allen faces a tall task against a Georgia Southern team that allows the 24th fewest total yards per game among all programs.

Both teams give the ball away one and a half times per game, however, the insertion of unproven quarterbacks might see an uptick in that regard. Georgia Southern is 18th in the NCAA in interceptions and will look to capitalize on Allen’s inexperience. Lousiana Tech only averages 24.8 points per game and is up against the stout Georgia Southern that only allows 22 points. With no run game to speak highly of, it all rests on the backup quarterback’s shoulders.

Expect this game to be a blowout. Maybe not to the tune of 52-10 that Lousiana Tech faced against TCU, but Georgia Southern’s run game is simply too strong. 4.5 points are nothing for Georgia Southern. If they get out in front, which they will, the run game will tire out the Louisiana Tech front. The Eagles secondary will look to feast on Aaron Allen’s errant throws and put this one away early. In addition, the Georgia Southern squad is extremely disciplined, 9th in the NCAA in penalties per game. Expect a big Georgia Southern win, covering the 4.5 points, and the under as the Eagles control the clock and stifle the Bulldogs’ offense.

After extending their hot and San Diego’s cold streak, the Seattle Mariners will be looking to leave Petco Park with a two-game sweep as they take on the Padres this afternoon. Yesterday, the Mariners pounded out a dozen hits and plated eight runs, and Chris Flexen pitched 6.2 shutout innings to collect his third straight END_OF_DOCUMENT_TOKEN_TO_BE_REPLACED