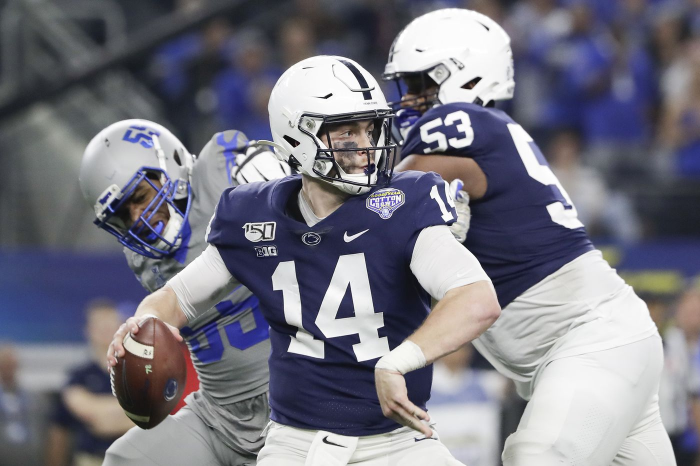 This weekend sees college football action return to the Memorial Stadium. Penn State will open their 2020/21 campaign with a clash against Indiana on Saturday, October 24th, by 3:30 pm European Standard Time. Both teams met last on the 16th of November 2019, where hosts Penn State came out victorious by 34-27. That continued a recent trend of the Nittany Lions victories as they are 5-0 head-to-head wins in their previous five meetings with the Indiana Hoosiers.

Despite being the away team, the Nittany Lions, Penn State currently sits on a Moneyline of -250 while the Hoosiers are set at +195. The spread of both teams features Penn State at -6.5 and the Hoosiers at +6.5.

A Case for Indiana Hoosiers

Indiana Hoosiers will be looking to beat the odds and cause an upset for Penn State in the highly anticipated clash, and they might have a chance. Up against a Lions’ defense that allowed teams to throw for an average of 251.1 yards per game last season and, as a result, were placed at No. 100 on the 130-team list for opponent’s passing yard per game, the Hoosiers’ strong passing attack can take advantage. More so, their attack has been bolstered by the availability of last season’s receiving hero Whop Philyor and of course, Penix Junior, who on the back of serious injuries that disrupted his last two seasons, is fired up to shine for the Hoosiers this season.

Additionally, a solid Indiana defense will be situated across the pitch, with them will be two top linebackers. Junior Jones is very athletic, and he will prove very useful for the Hoosiers’ defensive line as a linebacker and also his prowess in making plays in the open area of the pitch. Although, it is Micah McFadden who is most effective when playing the running game. McFadden was a proud recipient of the tournament’s Most Outstanding Defensive Player of the Year award and championed the Hoosiers with a total of 61 tackles. A natural linebacker who fills the spaces and is very strong is a prized asset for Indiana.

However, for the Indiana boys to really make a case for points on Saturday, they will have to utilize the air very often and as early as they possibly can. This is because of the elite Nittany Lions’ rush defense, which was the fifth-best in the country last season.

A Case for Penn State

On the other hand, Penn State will be showing off a new looking offense, with its prime focus being running the ball. New attack co-ordinator Kirk Ciarocca is vital in this change, as he looks to bring over tactics that worked well for him at Minnesota. Also, he has top talents such as Noah Cain and Devyn Ford to work with, both of who had a great run last year.

Even with the notable absence of Journey Brown, the Lions are not short of firepower across the pitch. New boys Caziah Holmes and Keyvone Lee arrived at the College with impressive four-star honors of their own, and they are both geared up to have an amazing season. Playing time should not elude them this weekend as the Lions will seek to dominate the game by taking possession of the ball and also pushing the Hoosiers against the clock at the Memorial Stadium. Furthermore, they will be positioned next to an offensive line, which is very rich in experience, has stronger depth, poise, and more talented than any of the previous teams managed by Coach James Franklin since his arrival at Penn State in the year 2014.

The Nittany Lions are favorites for this encounter as they have the weapons needed to exploit spaces in Indiana’s most used 4-2-5 formation.

This interesting bout promises to be a feisty encounter, but after careful consideration, we pick Penn State to win at 73.7% and Indiana at 26.3%.