Ohio State vs. Michigan Canceled: How Could It Impact CFB Futures Odds? 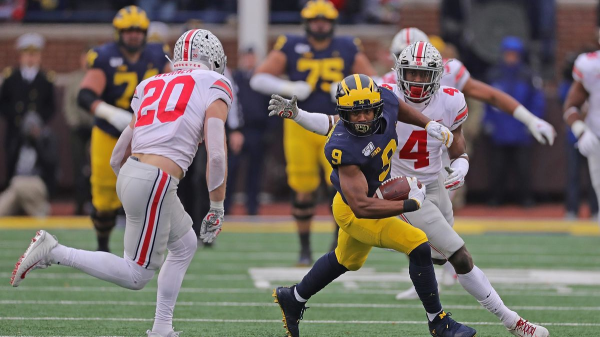 Every year, Ohio State vs. Michigan is one of the most anticipated rivalry games in college football. It hasn’t been much of a contest lately, as the Buckeyes have won the last eight and have lost only once since 2003. Unfortunately for Ohio State fans, they will not be able to see their team make it nine in a row this year. Yesterday, the game was canceled because of COVID concerns for Michigan.

The pandemic has caused many postponements and cancellations this season, but this is by far the most notable one. Not only does it mean that this matchup will not be played for the first time in over 100 years, but it also could have major implications for Ohio State and for college football betting.

In order to try to deal with the potential issues that could arise from playing a season during an ongoing pandemic, the Big Ten mandated that teams would have to play a minimum of six games in order to qualify for the conference championship game. That now puts Ohio State and the Big Ten in a difficult position. The 5-0 Buckeyes are a game short of eligibility due to Tuesday’s cancellation.

Now, Big Ten commissioner Kevin Warren and other key decision-makers have a big issue to solve, and quickly. Either they stick to the original rules, which would see 6-1 Indiana take Ohio State’s spot in the conference championship game against Northwestern. Or they find an opponent for the Buckeyes on short notice in order to get them to the required six games. Or they waive the rule, accounting for the fact that they did not expect as many cancellations as there have been.

Ohio State was a heavy favorite to win the Big Ten title, so those who have college football futures bets on the Buckeyes to win the conference are sweating it out right now.

How Does This Affect the College Football Playoff?

In the latest College Football Playoff rankings, which were released Tuesday night, Ohio State remained in the top four with Alabama, Notre Dame, and Clemson.

However, if the Buckeyes are not able to play for the Big Ten title, their chances of remaining in the top four would take a big hit, unless they could schedule a non-conference game against a highly-ranked opponent. A possible fit for such a game could be Texas A&M, who is currently fifth but won’t have a conference championship on their resume like other playoff hopefuls due to finishing behind Alabama in the SEC West.

Per the latest college football futures odds at Fanduel Sportsbook, Ohio State (+700) is third behind Alabama (-115) and Clemson (+200) and ahead of Notre Dame (+750) and Florida (+900) in the national champion odds. So the decision that the Big Ten makes could knock one of the national championship favorites down the list and see the odds shorten for the likes of Indiana (+3000) and Texas A&M (+3000).

Coming into the season, Buckeye quarterback Justin Fields was one of the leading favorites in Heisman Trophy odds along with Clemson’s Trevor Lawrence.

Fields hasn’t done much himself to hurt his Heisman hopes outside of throwing three interceptions against Indiana, but he and Lawrence, who are both at +2000, find themselves well behind in the Heisman odds as the regular season winds down. That is due to the stellar performances of Alabama’s Mac Jones (-135) and Florida’s Kyle Trask (+110), who have distanced themselves from the rest of the field.

That being said, having this week’s game and the Big Ten title game would have given Fields another couple of opportunities to earn himself some votes. The Big Ten is now on the clock to see if he does indeed get that chance.