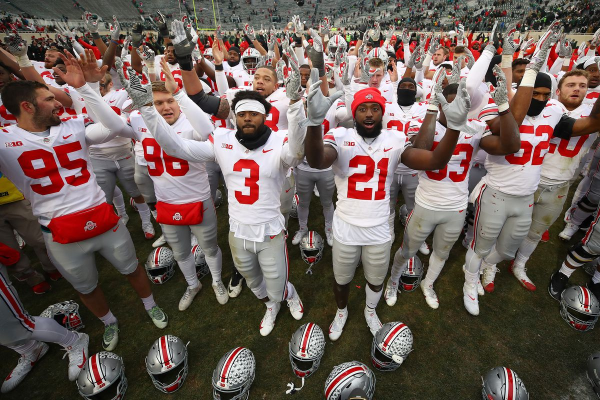 The Maryland Terrapins and the Ohio State Buckeyes would be going head to head on Saturday, the 14th of November at Capital One Field at Maryland Stadium College Park, MD. The match would air on Big Ten and would commence at 3:30 PM EST.

Both teams would place their respective Big Ten winning streaks on the line. Last Saturday night, the Buckeyes (3-0) had a 49-27 victory over Rutgers while the Terrapins (2-1) claimed their second straight win by overtaking Penn State, 35-19.

Can The Terrapins Slow Down Justin Field?

Ohio State’s Justin Fields is one of three candidates for the sport’s most grand award. He is alongside Clemson’s Lawrence and Alabama’s Mac Jones with +175. However, with Lawrence being absent from about two games due to COVID-19, he might take the award home. More importantly, he has had more touchdown throws, zero interceptions than incompletions (he’s 72 of 83 this season), and one wonders how the Terrapins would manage in this game.

Following their 49-27 victory over the Rutgers Scarlet Knights on Saturday night, Ohio State advanced to 3-0. Ohio State is tied with Indiana at 3-0 for the first spot in the East division of the Big Ten. Quarterback, Justin Fields, threw for 314 yards and 5 touchdowns, and before coasting to the win, Ohio State led 41-9 into the final quarter.

Having won 2 games straight, most recently a 35-19 victory at Penn State in which Maryland jumped out to a 35-7 lead and never looked back, the Terrapins enter Saturday fixture with an intent to ride the wave of victory. Quarterback Taulia Tagovailoa is fourth with a completion rate of 67.4 percent, 770 yards, and six touchdowns in the Big Ten so far.

Tagovailoa passed for 394 yards and three TDs two weeks ago in an overtime victory over Minnesota while running for 59 yards and two touchdowns. For his contributions, he was the Big Ten’s Co-offensive Player of the Week (alongside Justin Fields). In the first two rounds, the defense struggled, but they did far better against Penn State. Allowing 474 yards (104th), 247 passing yards (77th), and 227 rushing yards (108th) per game. They are very balanced on offense, averaging 273 yards per game passing and 156 rushing yards.

In the Big Ten, running back Jake Funk is eighth in rushing, averaging 112.0 yards per game. His average of 7.8 yards per carry is second amongst the Big Ten. Freshman Tarheeb also has a team-leading four pass breakups in the secondary and is second in the squad with 12 solo tackles.

The Ohio State Buckeyes are the favorite pick to win the game, and with good reason. The biggest issue with their game was Ohio State slacked off against the Knights in the 2nd half of their game, but they are still a force to be dealt with on offense. The Terrapins are on a good run playing at home, but it is most likely that the Buckeyes will go all out and leave no room for their opponents to snatch the win.