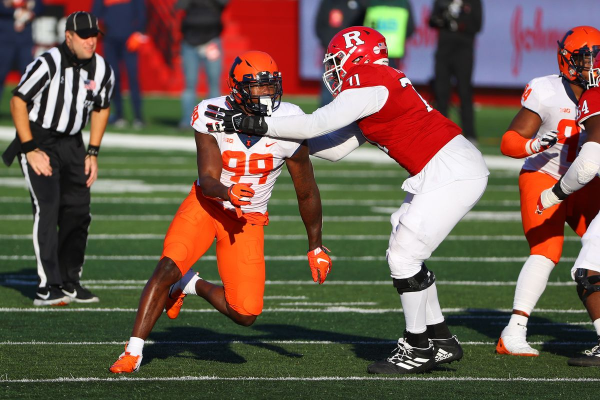 The 4-0 Ohio State Buckeyes are set to take on the 2-3 Illinois fighting Illini, and the two teams are coming into this game with vastly different backstories. For Illinois, they have already gotten blown out two times this season by Minnesota, and Wisconsin, which is not a promising sign when it comes to their chances of taking on Ohio State.

Of course, some of that might have to do with Brandon Peters being benched for 3 weeks due to Covid-19 protocol, but he still does not have the most productive offense behind him. In fact, the team has been forced to rely on the run game in Peter’s absence, but even that hasn’t been enough to help the team with their offensive woes.

While Illinois has managed two wins so far this season, they were not the most convincing of victories. For example, the team defeated Rutgers 23-20 a few weeks ago, and blew out Nebraska 41-23 as well. Now, a win against a conference rival might seem like a step in the right direction, but it was their only victory of merit. Also, Nebraska got decimated by Ohio state at the beginning of the season, making the win seem less impressive.

Speaking of the Ohio State Buckeyes, they remain undefeated, but have shown some cracks in their armor. One perfect example of this was their game against Indiana last week, which resulted in the Buckeyes just barely hanging on defensively. If nothing else, this is something that Illinois needs to examine to see if there is anything, they can learn from that game. Maybe they could even find a way to pressure fields and force him into making mistakes.

Believe it or not, a lot of Saturday’s game is going to come down to three things. The first is how well Illinois studies the game tape from Ohio State versus Indiana, which resulted in the Buckeyes defeating them 42-35. While the victory helped establish Ohio State as the dominant team in the Big Ten, it also may have exposed a plethora of holes in the team’s defense.

What Indiana might want to do is figure out how Indiana was able to force Justin Fields into 3 interceptions , and work from there. Another thing Indiana needs to focus in on is ways to make sure Fields can’t move the ball. Indiana achieved this by holding Fields to only 2 touchdowns, but the run game was able to step up in his absence.

Whether Illinois’s offense can capitalize on those weaknesses remains to be seen, but they stand a much better chance with Brandon Peters under center. Speaking of Peters, the second deciding factor is whether Peters can have a stellar day against a stacked Ohio State defense. He did manage to put up 205 yards and one touchdown against Nebraska, but that is not going to be enough to beat Ohio State

Keep in mind that Peters was forced to miss the first 3 weeks of the season after testing positive for Covid-19, and you can start to see the insurmountable challenge that awaits him on Saturday. As for the third factor, it comes down to the fact that Ohio State has a much better defense and offense, making them a nightmare for a team that has struggled to notch two wins.

For example, Ohio state has outscored their opponents 181-104 this year , and will likely widen that margin as the season progresses. Unfortunately for Illinois, their quarterback troubles in the first couple of games has resulted in them being outscored 98-160. Those numbers improved with Peters back with his team, but it’s probably not going to be enough to beat the third best team in the nation.

It should come as no surprise that Ohio State is expected to defeat Illinois handedly on Saturday afternoon. Starting with the spread, Ohio State is listed as –23.5 favorites over their Big ten rival. The moneyline reads the same, showing OSU at –2500, and Illinois at +1040. Finally, the over/under for the game stands at 54.5, with 89% of betters placing wagers on Ohio State.

Although all of this added together makes Ohio State one of the safer bets for Sunday afternoon, the over/under might be what fans want to pay attention to in this game. The reason for this is that the total has reached the over in four out the last five matchups between the two teams. Sure, the over/under is 54.5 for this game, but betting on going over might be a safe way to make a little bit of money on Saturday afternoon. Or maybe just a way to make things interesting for what could be a blowout.

If you want to make some money this weekend, you are much better off betting on Ohio State to obliterate Illinois in this Big ten matchup. Not only is that evident by just how charged the Buckeye’s offense is right now, but also by how lost Illinois looked throughout the first couple of games this season.

In the end, there are just too many obstacles for Illinois to overcome to win this football game. They might have a chance if an injury or an ejection occurred, but that is not likely to happen. This means gamblers will be throwing money away by betting on Illinois, and should make better choices with their life. Choices that don’t involve placing a bet on a team that has no chance of winning.