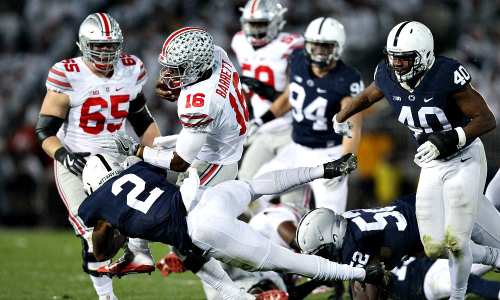 The Big Ten is finally back. Last week was Week 1 for this group and it was full of interesting results. One of those was Penn State dropping their opener on the road as a favourite against Indiana. Ohio State might have pushed a little more than expected early but they ultimately beat Nebraska by a solid margin.

It is just one data point for Ohio State, but it is a good one. They rolled up 52 points against the Cornhuskers with a balanced attack. QB Justin Fields was sharp though they are probably not going to want him to run as much as they did last week. I have no clue how the Heisman is going to evaluate players playing different schedule lengths this season. If Fields is not penalized he might grab the hardware this season, he only had one missed throw in the opener. On defense, the Buckeyes only gave up 17 points, just three in the second half. All looks good on that side of the ball.

Before the first snap of the season Penn State was already down its best player on offense and defense. On defense, LB Micah Parsons was considered one of the best at any position in the country and perhaps the best athlete in the game until he opted out. Then the week before the season started we learned that RB Journey Brown was out indefinitely with an ailment. Despite that they were still favoured on the road against Indiana. They lost by one in overtime. The sky isn’t falling but it is definitely cloudy in State College.

This one opened at -10.5 and and has already moved a couple of points. That is pretty significant so early in the week and I think it is based on what our eyes finally saw. Ohio State looked like it has not skipped a beat while Penn State has slipped from the second best team in the conference to at least third, maybe lower. While everything was business as usual for the Buckeyes we did see Penn State QB Sean Clifford as a running threat against Indiana. He rushed for more than 100 yards and led the team. It might not be such a bad thing for him to be a little more mobile against a strong Ohio State defense. After giving up touchdown in the final minute that forced overtime last week I am worried the Nittany Lions defense might not be up to the task against an even better offense this week. Take Ohio State to win each half by a TD and cover on the road. No reason to wait, I can see this going up a little further.

If Penn State had all of their players I would have given them a pretty good shot of beating Ohio State, even if they still were coming off an opening loss, which we likely would have written off as being in a tough spot to start the season. Without them I am just not seeing it. Penn State has really good talent but they are not at the level of the Buckeyes. They are very well coached but upsets are built on the backs of elite player and Penn State might not have any this season. Ohio State at this price is a pass if you are building your bankroll, but you can tuck it into a parlay.

The Ohio State game last week went under by a half point while Penn State needed overtime to get an over. In the series, the last two have gone under and four of the last five. This 64.5 point total has risen with the spread telling you that the points being added are going to be scored by Ohio State. I think the Buckeyes will be able to move the ball well. Penn State will be better able to slow them than Nebraska, but I would be surprised if Ohio State does not score in the 30s. To get that total though we probably need more than that though and I think Penn State might have some trouble converting, especially punching the ball into the end zone. If they can only muster low 20s that won’t be enough. They are likely to have to push the envelope too and take some chances on fourth down. I don’t like their chances of having consistent sustained success with that against OSU so some drives will stall out with nothing.